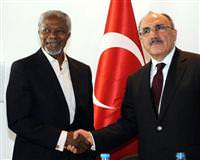 Deputy Prime Minister Beşir Atalay expressed that Turkey is prepared to continue providing all forms of support to Syrian refugees. Atalay was speaking at a press conference held with visiting U.N. and Arab League Special Envoy Kofi Annan at the Hatay Airport.

Atalay explained that he and had spent the day visiting the refugee camps in Turkey. Atalay expressed that Turkey was willing to continue to offer all forms of support to Syrian refugees and stated, "According to our estimations, things are getting worse in Syria and it is becoming a critical situation. Syrian troops opening fire on refugees, wounding four including one Turkish national is unacceptable. The same day, 21 Syrians who escaped the attack entered our country. Shortly thereafter, two of them passed away," explains Atalay.

Atalay went on to state the importance of speaking with the refugees themselves in the camps, "This was especially beneficial for Mr. Annan. We believe that they will better comprehend our concerns in regards to the situation in Syria after witnessing the developments along our extensive border."
U.N. and Arab League Special Envoy Kofi Annan expressed the expectation that military activities in Syria would decrease yet instead they are witnessing an increase. Anan went on to state that the exponential increase in the number of refugees coming into Turkey was something no one expected as he called on the Syrian administration as well as the opposition to immediately halt all violence.

Kofi Annan also expressed how pleased he was to be in Turkey again and thanked the Turkish government for facilitating the visit. Annan also thanked the government for their display of solidarity and the generous aid extended to Syrian refugees and stated, "I have seen many refugee camps, however this is one of the best."

In response to the increased influx of refugees into Turkey, which he called tragic, Annan stated, "We have to continue exerting efforts. We have to stop this violence and prevent the conditions that are causing these people to abandon their homes. At the same time, we need to deliver humanitarian aid to these people. We also need to sit down with all sides in order to debate Syria's future." Emphasizing that the most important factor was the safety of the Syrian public, Annan stated, "This has gone on too long. The violence must come to an end and the weapons must be stopped. The troops need to withdraw to their barracks."

Reminding that the Syrian administration has made a number of commitments including halting the violence, Annan stated, "They now need to take a step towards halting all forms of violence. And I mean all forms of violence. By April 12th at six a.m. all weapons must be silenced and all of these sorts of activities halted. I want to call on the Syrian administration and the other Syrian sides to stop the violence. I also do not want any sort of preconditions put forth in order to end the violence. This is extremely significant for the Syrian public and for Syria."

In response to a question on whether the plan would be successful or not, Annan stated, "It is too early yet to say that the plan was not successful. We all want to implement this plan. The Syrian administration has accepted this plan as has the opposition. The decision was made for progress in line with this plan. The government promised to withdraw military forces in accordance to this plan."

Annan went on to state, "The plan was not successfully realized within the timeline initially established. However, this should not mean that the plan was unsuccessful. There is up until the 12th of the month. All members of the U.N. Security Council are working on exerting pressure to the Syrian government and all related parties."