Why shouldn’t there be two states in Cyprus 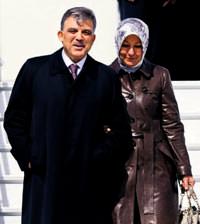 President Gül discusses Cyprus and recalls his experience with the February 28th memorandum: "We are a government that has received the vote of confidence from the assembly. I told Erbakan that these regulations went against our program and if we put them into effect, we would be committing a crime.”

Paying a visit to Holland in order to commemorate 400 years of trade relations, President Abdullah Gül answered journalist's questions during his flight.

Explaining that relations with Holland began in the Ottoman period and have continued throughout without any break of war or conflict, Gül points out that taking into consideration the nation's population and surface area, economic relations between the two nations are of an inverse proportion. Noting that Holland has the 16th largest economy in the world, Gül stated that it was now Turkey's time for growth. With a population of 16 million, per capita income in Holland comes to approximately 50,000 dollars.
President Gül also responded to questions from the press on the recent detainments in connection to the February 28th post modern coup.

A number of journalists asked the president whether the February 28th memorandum was discussed with the cabinet at the time, to which Gül responded by stating that back then, he said to Prime Minister Necmettin Erbakan, "We are a government that has received the vote of confidence from the assembly. Governments establish their legitimacy through the validation of the program they present to the assembly. I told him that these regulations went against our program and if we put them into effect, we will be committing a crime. Gül went to state that he doesn't recall the regulations being discussed by the cabinet.

According to the President, Erbakan wanted to surpass the issues at the time without making a huge commotion. Expressing that his current position does not allow for him to go into great detail on what transpired at that time, President Gül stated, "I didn't think that after Özal and the liberalism discourse he brought on that there would be another interlude."

When asked if the government at the time ever considered implementing sanctions against the military, the President responded by stating, "During those days it wasn't easy to do that or to even discuss it." Gül went on to emphasize the importance of the February 28th post-modern coup being tried now. Pointing out that the culture of non-punishment works to instigate people, President Gül stated, "If people see that others are being held accountable even 30 years after the time, it will be a deterrent." Gül went on to say, "I do believe that a number of people who got wrapped up in the climate at the time are now regretful."

'WHY SHOULDN'T THERE BE TWO STATES IN CYPRUS'

President Gül also responded to questions on the Cyprus issue. Pointing out that Cyprus will soon be taking on the EU term presidency at which point for six months' time all presidential-level relations will be halted, however relations between commissions will continue, Gül stated that from a European perspective it is funny that Cyprus, with its unsolved issues, can be allowed to take on the EU term presidency. Gül stated that prior to 2004, Turkey's justification was not sufficiently believed in by the international community, however he emphasized that has now changed.

Noting that Cyprus entered the EU during the Hague period, Gül stated that he had told Denktaş to say 'yes' and for him to tell the Greeks to say 'no'. In the end, at the airport at the time Denktaş stated that he was headed to say no to the Hague", states Gül who goes on to explain, "Foreign policy at that time was not completely in the public's hands."

As a result, the Greeks had 'room to breathe' explains Gül. "It was based on this that we defended the Annan plan. I faxed New York and requested they say yes. If we had done what we did in New York at Lahey, then the Greeks would not have been in the EU today," states Gül who went on to say, "Why shouldn't there be two states? Northern Cyprus is now in reach of recognition. If the expectations do not fruition, then everyone will go their own way."

This is a translation of an article originally written by Hasan Bülent Kahraman.