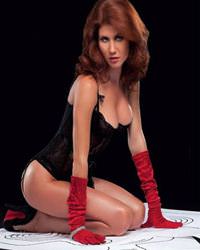 Known as the ‘red agent’, Anna Chapman, sexy agent revealed by the U.S. to be part of a Russian spy ring in 2010, will be coming to Turkey to walk the runway for the Dosso Dossi Fashion Show.

The Dosso Dossi Fashion Show which will run from June 7th to the 14th at the Antalya Expo Center will be hosting a number of famous figures including Anna Chapman, who will be donning a very special costume for a fee she plans to donate to orphans in Moscow.

Chapman told officials from Dosso Dossi that she would only come under the conditions that her fee was donated to the foundation of her choice, an act which has been received with significant admiration.
Preparations are hastily ongoing for the exciting show and the Red Agent, who is followed in intrigue by people in Turkey as well throughout the world, has since announced that she will be participating in the show on her Twitter account.

After Chapman was deported from the United States she began devoting herself to charity work and like she has done in previous organizations, she has requested her fee be donated in its entirety to the 'Right to Smile' foundation based in St. Petersburg and devoted to helping orphans.

Which hotel and for how many days the beautiful agent plans to stay has not yet been announced.