PM Erdoğan: “We do not recognize a Southern Cyprus state” 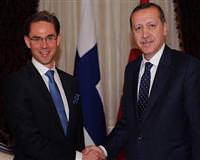 SYRIA: "I want to express that we do support the Annan Plan. However the regime continues the bloodshed and killing. That they have 'withdrawn tanks' is partially true. They need to be brought back to the barracks. As long as this is not done, then it means that Annan's six-point plan has not been fulfilled."

MEETING WITH BARZANI: "The issue of Iraq is the most important one on the table. Afterwards we will move on to discussing the region in which Syria will be the most significant issue. During the course of the meeting however there could be a number of other discussions held. It is inevitable that the issue of terrorism in Turkey and the PKK will come up because there are aspects that involve Northern Iraq. I hope that the impact of these discussions will surface as soon as possible."

PRAISE FROM KATAINEN
Finland's Prime Minister Jyrki Katainen had many words of praise for Erdoğan and Turkey. Emphasizing that Turkey has now become a superpower when it comes to foreign policy, Katainen stated the following: "As a superpower in foreign policy, Turkey is very significant for us. Turkey's position is incredibly important for the entire world. You have conducted extremely crucial and effective diplomacy, creating a name for yourselves. You have also modernized your nation in a very short period of time."