PM Erdoğan ‘We will draft the new constitution’ 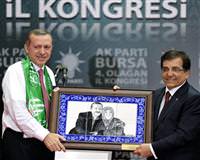 Referring to the AK Party as a pioneer in evolution and reform, Prime Minister Recep Tayyip Erdoğan made a promise that the new constitution will be released in any state and under any condition.

Speaking at the AK Party Bursa Congress, Erdoğan delivered a series of messages on the drafting of the new constitution. "With a civilian, participatory, liberating and democratic constitution, we will be making the democratization process permanent. "In drafting the new constitution, the AK Party group will not leave the table. If we see that it isn't working, then we will see which party we can do it with and will welcome them to join us. We have always been reconciliatory and we will continue to be so, because, we continue to do what we do.

There is no 'I' in the AK Party, there is 'we'. We are a team. We made a decision when we were founding this party that an MP would be able to serve for three consecutive terms; however they would have to take a break in the fourth term. Afterwards, they could continue on being a deputy. Now some say, "Mr. Prime Minister this is your third term. What will happen if you go now? The answer is ready. We are transitory. One day we are going to die and these seats don't belong to us!

That's why no one should get used to their position; we will be changing constantly… We will be holding conferences in Anatolia and we will work with think tanks. Why? We are pioneers in this country of evolution and reform. Our purpose is not to become deputies or the prime minister, our aim is to change Turkey and to create a stronger nation.

As long as the PKK terrorist organization refuses to relinquish their weapons, military operations will continue. However the moment that weapons are dropped, our security forces will also stop staging operations. We cannot hand over this country to any sort of criminal or illegal organization. If you are carrying a weapon and killing innocent people, then you will have to contend with Turkish soldiers.

'Arabs are our brothers'

Just how it has been for the past 600 years, today we also consider the Arab public to be our brothers and our neighbors. No matter how much Turkey may be turned towards the West, or at least identified with that projection, its back will never ever be turned against the East or the South. We believe that the distance that has been put between us over the past century is imaginary. It is based on this understanding that over the past nine and a half years, as a government we have established a very unique form of collaboration with our ancient friends. In our region, issues are entirely looked at from a human perspective; we harbor no other intentions beyond peace, welfare and brotherhood. We only look from our hearts at the Palestine issue, the instability in Iraq and the pain recently suffered in Syria. Turks are your brothers. Turkey is your home. We see tourism and especially tourists that come from Arab countries, as a means to bond, embrace, converse and share woes.

HEADED FOR A PRIME MINISTRY RECORD