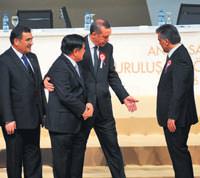 Gül’s messages on the new constitution made its mark at the 50th anniversary of the founding of the Constitutional Court.


THE NEW CONSTITUTION SHOULD NOT CARRY THE SEAL OF ANY PARTY: Constitutions should not be prepared based on reactionary motives. Efforts to use the constitution to render 'power and pride' for the victims of the past have always resulted in negative results. In its very nature, every constitution is based on a basic philosophy and spirit. Constitutions should not carry the seal of any specific ideas or party's ideology or doctrine. Let us not forget that a constitutional rule that protects us from our own power when we are powerful today will protect us from the persecution of others when we are weak tomorrow.

CONFRONTING THE COUPS: The 1982 constitution was a product of the coup and carried the spirit of that period, and was of a guardianship and bureaucratic-authoritarian quality. Therefore, it is now imperative that we draft a new constitution. Furthermore, during this time in which as a nation we are trying to confront the coups of the past, the fact that we are still governed by an interim period constitution constitutes a serious contradiction with the democratic level our nation has reached.

COURT FREED FROM GUARDIANSHIP: In terms of fulfilling the functions of democracy and justice, the role of supreme courts, which supervise the constitution on behalf of the people, is just as important as that of constitutions. Our Constitutional Court, which as of today has a past spanning half a century has been freed of the dominance of shrouded guardianship.

TO THE ATTENTION OF THE BREIVIK'S IN THE WORLD: We are extremely concerned about the increase of racism, anti Islam and animosity towards foreigners in Europe which is developing parallel to the economic crisis… If we cannot preserve our shared conscience and European values against the threat of racism, animosity of foreigners and Islamophobia, then not only Europe, but the entire world will no longer be habitable. It is under this pretext that we must closely examine the racist terrorism attacks staged by Norwegian national Breivik.

In a letter of congratulations to Constitutional Court Chairman Kılıç , Prime Minister Erdoğan stated the following: "To create a powerful constitution that will strengthen our democracy and economic development and will establish strong grounds for Turkey's future objectives based on our people's legitimate demands, the superiority of the law, the principle of equality and human rights and liberties in the best manner possible should be our national duty and responsibility."