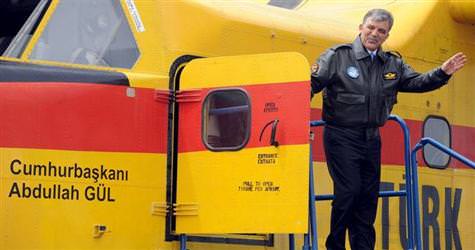 Speaking at the inauguration, Gül stated, "Today is truly worthy of excitement. Turkey's aviation history is slightly woeful. In the 1920's we were a nation that manufactured and sold planes. Then, this production stopped. However, it is not too late for anything. We can now all rely on the expectation that Turkey will take great strides in aviation and aerospace."

The ceremony also included demonstrations of motorized paraglides, model planes and fire extinguishers. At the close of the ceremony, Gül was gifted a flag that was brought down by parachute.

The world's fist pilots to be given the title of 'Professor' will be trained in Turkey. Pilots who complete their pilot training studies at THK University will be able to continue on to graduate studies. Explaining that pilots will be able to fly under the title of 'Associate Professor', 'PhD' or 'Professor', in an interview with SABAH THK University Rector Prof. Dr. Ünsal Ban stated, "The majority of pilots in Turkey are from the military. We are lacking in academics. We also aim to train pilot professors at this university."
Turkey's new aviation and aerospace university also plans to train Turkey's first-ever astronauts. It is within this context that THK has made an agreement with one of the United States' leading universities in aviation and aerospace Vaughn College. Through a student exchange program, Turkish students will be able to study in the USA to become dual diploma astronauts.