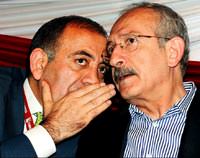 Angered at the fact that the CHP party headquarters came out in support of Istanbul District Chairman Salıcı, Deputy Chairman and CHP’s number two Gürsel Tekin has resigned.

Main opposition party CHP, or the Republican People's Party, was rattled by the surprising resignation of the party's Deputy Chairman Gürsel Tekin yesterday.

Tekin's resignation has brought to light his long-standing dispute with fellow party member Erdoğan Toprak. Tekin presented his resignation yesterday morning to CHP Chairman Kemal Kılıçdaroğlu. Explaining to Kılıçdaroğlu that he no longer wants to participate in a Central Administrative Board meeting with Erdoğan Toprak, Tekin supposedly blamed Toprak for wrongly redirecting the board.
According to lobbies, the upcoming May 13th Istanbul District Congress was the reason behind Tekin's resignation. Tekin was supposedly against the fact that the general headquarters was going to support Istanbul District Chair Oğuz Kaan Salıcı.

According to the information obtained, Tekin told Kılıçdaroğlu that he felt Salıcı was not fit for the position and that the district administration needed to be changed. Tekin was supposedly planning to nominate Ali Özcan to take over Salıcı's position. Speculation was that Gürsel Tekin would resign following the Istanbul District Congress. Meanwhile, lobbies had alleged that after Kılıçdaroğlu was elected as CHP Chairman, Şişli Municipal Municipal Mayor Mustafa Sarıgül would be making a move and Tekin would be joining him.

Speaking to NTV, Kemal Kılıçdaroğlu stated, "I was not expecting this resignation." Explaining that initially he did not accept Tekin's resignation, Kılıçdaroğlu went on to state, "Later, when he announced his decision to the public, I was forced to accept his resignation. I wouldn't have wanted it to be this way; he was a friend that we worked well with."

Sarıgül: We haven't even had coffee together

Şişli Municipal Mayor Mustafa Sarıgül refuted claims that he plans to form a party with Gürsel Tekin. Expressing that they haven't seen each other in years, Sarıgül stated, "We haven't even had coffee together. I am currently continuing to serve my duty as municipal mayor. I am not embarking on any such endeavors with anybody."