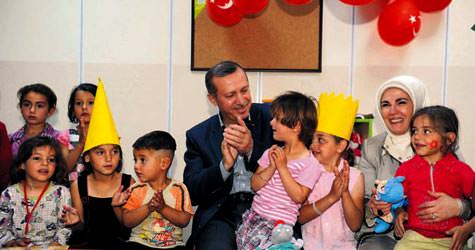 Speaking to Syrian refugees at the Öncüpınar camp, Erdoğan stated, "Sooner or later those who have persecuted our Syrian brothers will have to pay the price for this oppression.”

Prime Minister Recep Tayyip Erdoğan paid a visit to the Öncüpınar camp located in the border town of Kilis on Sunday, where he made an address to Syrian refugees. Speaking from the top of a bus,

Erdoğan stated, "How many dictators have had to pay the price for their tyranny and have left a dark stain on history that will never be erased." The Prime Minister also said that sooner or later, the Assad regime will also have to pay for this persecution. Erdoğan went on to deliver the following messages:

YOU ARE IN YOUR OWN HOMES

You are now in the land of your brothers, so you are in your own home. Hopefully you will be in our care until security has been established in Syria and you decide to return.

Oppression remains, but it is not eternal. Tyrants that have murdered innocent people, children and women, have throughout history been forced to pay the price sooner or later and they will. How many pharaohs and how many nimrods have paid the price, leaving as black stain that can never be erased in history before abandoning this world. Hopefully those who have persecuted our Syrian brothers will have to suffer the consequences sooner or later in front of the nation.

We have only one concern and that is for the bloodshed to come to an immediate halt, for tears no longer to be shed. We see the Syrian public and the administration as separate. I must be very clear in saying this. Bashar is losing blood every day. I want to address my Syrian brothers that are here as well as those that appear to be behind Assad in saying; 'We stand beside the Syrian public. However, we are in no way in support of Bashar's administration.' This is because it is impossible for us to stand behind a regime that uses tanks and weapons against its own public.

Turkey will be with you until the end. We are going to increase the capacity here at this camp to 12,000. There will be 2,060 container homes set up for accommodation. We are providing for all of your needs spanning from education to food, from sports to security. We are providing preschool education for 805 students in 35 classes. We are also working on being able to provide education for the 4,251 children of school age staying here. We will continue to do all that we can until you are able to safely return to your nation. Do not lose hope. Don't ever feel dejected. We stand beside all of our Syrian brothers.