Italy’s PM: Turkey is a treasure for us 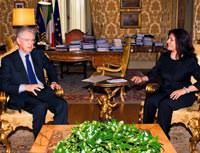 Prior to Erdoğan's visit to Italy, SABAH had the opportunity to speak with Italian Prime Minister Monti, who expressed that he believes “Ankara’s privileged relations with the entire Arab world is a treasure that and would increase the EU’s effectiveness capacity.

Italian Prime Minister Mario Monti spoke with SABAH prior to the inter-governmental summit which began today.


Hosting SABAH in the Prime Ministerial Palace Palazzo Chigi, Monti expressed how pleased he was to see Erdogan in Italy after last meeting him in March in South Korea.

THE BALANCE TO CHANGE IN EUROPE

Monti was extremely optimistic regarding mutual relations between Turkey and Italy and immediately brought up the few vacations he has taken here, even mentioning Bodrum. Meanwhile, the interview began with talk of the recent presidential election results in France.

The election of Hollande as France's president has brought an end to the Sarkozy-Merkel axis.

Yes, the balance in Europe will completely change and I hope there will be positive results.

A Merkel without Sarkozy, could be more open towards Turkey. You have quite good relations with Merkel; do you think she will listen to you when it comes to Turkey?

I am hopeful. I hope she listens.

After an extensive break, this will be the third intergovernmental summit between Turkey and Italy in Rome. What will the topics discussed? How does the Italian government perceive relations between the two nations?

We will be dealing with a number of issues spanning from political and trade relations between Italy and Turkey, while also not forgetting Turkey's function as a bridge between the East and the West, and the role the nation could play in Turkey. I am extremely optimistic regarding relations between the two countries. I hope that the mutual friendship between Italy and Turkey will strengthen even further in the future. Italy is one of the countries that most favors Turkey joining the European Union. This factor will be one that contributes to intensifying friendship between the two countries. Of course, while mentioning all of this, we must not forget the extensive trade relations between Rome and Ankara as well as the number of Italian entrepreneurs in Turkey.

You had a short discussion with Prime Minister Erdoğan in Seoul, and you will also be meeting again tomorrow. How would you evaluate Erdoğan's leadership?

In democracies, leaders are evaluated by their own citizens in elections. From this perspective, I can say that Prime Minister Erdoğan and the AK Party have acquired an increasing public consensus. In the 2011 June elections, their approval reached up to the 50 percentile.

Ankara's EU accession negotiations are currently in a still phase, there are serious problems when it comes to closing chapters. From Turkey's perspective the EU is losing its appeal. Can Italy show the necessary volition and interest in addition to support to revitalize Turkey's accession process?

Italy has a strategic interest in the advancing of Turkey's EU accession process. The governments before me also worked to this end. We have always said to other European partners that Turkey's entry into the EU would be an incredible opportunity in terms of having further cultural, economic and effective political comprehensiveness.

Just think how relations between the European Union and the entire Middle East region and Africa would take off! I think that Ankara's privileged relations with the entire Arab world and this region of the world is a treasure that and would increase the EU's effectiveness capacity.

"TURKEY IS A SOURCE OF INSPIRATION IN THE MIDDLE EAST"

Turkey exerts a 360 degree foreign policy. How do you perceive Turkey's international position?

Turkey's close relations with the Middle East, the Balkans and the Caucasus are the natural result of its own geo-political position. Turkey plays a very important role, which Italy supports, in finding joint and peaceful solutions to problems in the region.

Do you think that the Turkey model is applicable to the Middle East?

The developments in the Mediterranean and the Middle East provides Turkey with wide areas and great opportunities that are complicated to direct. Turkey is a source of inspiration as both a democratic and Muslim country for the new realities in our region.

Do you have any concerns regarding Ankara's relations with the EU?

I don't think that Turkey's relations with its close neighbors will be at the same level as their strategic relations in the EU. I also do not think that they are conflicting with Turkey's intent to join the EU. Quite the contrary, Turkey's relations with its close neighbors could create one of the parameters of joining the EU.
Europe with its economic and social crisis, and aging population, wouldn't it be beneficial to accept Turkey, with its young population and over seven percent growth?

With Turkey's fast growing gross national product and a public consisting of a majority of youth, Turkey's role goes beyond being a bridge between the east and the west. Turkey's entrance in to the EU could contribute to mutual interaction and understanding. In addition, it could provide both Turkey and Europe with further economic opportunities.

There are over 900 Italian firms in Turkey. The government has recently presented Italian firms with an incentive package. As economic relations develop, how are you planning to offer incentives?

As you said, there are a number of Italian firms in Turkey. Turkey plays a strategic role for Italy's economy. We are Turkey's second European trade partner. Our mutual trade has continually increased over the past ten years, to the point where in 2011 for the first time ever it surpassed the 20 billion dollar target, reaching 21.3 billion dollars. Italy is also a main partner for Turkey in a number of strategic sectors such as banking, energy and infrastructure.

I can tell you now, that there will be a number of mutual agreements and announcements made between Turkey and Italy during the summit. We aim to increase and facilitate economic, commercial, scientific and business relations.

This is a translation of an article originally written by Yasemin Taşkin.