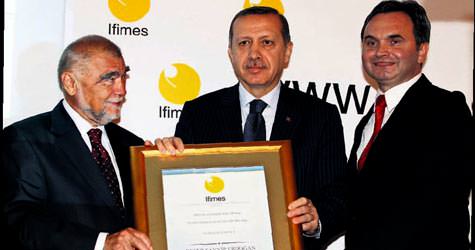 While receiving an award for ‘World Personality of the Decade’ in Slovenia, Erdoğan stated, “We have never allowed any issue to reach an impasse.”

Prime Minister Erdoğan paid a visit to Slovenia prior to his trip to Italy. Erdoğan first met with Slovenian Prime Minister Janez Jansa and later the two premiers held a joint press conference.

WE HAVE NEVER BEEN HOSTILE WITH FRANCE

Responding to a question regarding the recent elections in France, Erdoğan expressed that they have never been enemies with France nor do they ever want to be, "Unfortunately over the past nine and a half years, we have always opted to remain silent to the Sarkozy administration's negative attitude, that is until we displayed our stance in regards to the Armenia issue. "There is one thing that does upset us," says Erdoğan. "I truly hope that this is not true and I am considering it not to be, however if there has ever been the stance expressed that Turkey cannot become an EU member until the Armenian issue has been solved, well then we will have to reconsider the situation."

Later, Prime Minister Recep Tayyip Erdoğan attended an award ceremony for The International Institute for Middle-East and Balkan Studies, where he was given the award for 'World Personality of the Decade'. The IFIMES Advisory Board announced that they have selected Prime Minister Erdoğan for his leadership vision, his positive policies on the Middle East and the Balkans, his global economic success, contribution to the alliance of civilizations and for bringing Turkey to the positive point where it is now.
During his acceptance speech, Erdoğan thanked IFIMES for entrust ingthis award to him and stated, "It is a great honor to be named World Personality of the Decade. However, I want to express that I am extremely pleased to be receiving this award from Slovenia's prestigious institute and in front of members of the state. I believe and hope that this meaningful award will fortify the bridge of friendship between Slovenia and Turkey and will increase the two nation's collaboration, dialogue and shared goals and ideals just as much as it lends to the solidarity of our people."