PM Erdoğan: “The presidential system should be discussed” 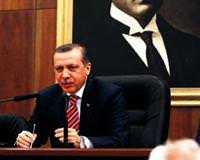 Upon completing recent trips to Slovenia and Italy, Prime Minister Tayyip Erdoğan delivered a series of significant messages on the constitution and the February 28th investigation, speaking to journalists on the return flight and during a press conference held at Ankara’s Esenboğa Airport.

When it comes to the debate surrounding Turkey's adopting a presidential system, Erdoğan says 'it is not imperative'. As for the recent wave of arrests in the February 28th postmodern coup case, Erdoğan stated, "When these waves come back to back a nation could drown in them."


In regards to the recent debate regarding switching to the presidential system, Prime Minister Erdoğan commented: "We need to learn the concept that democracy is a regime of debate. We must debate everything; we must discuss issues and not shy away from this.

Erdoğan went on to state: "With my nine-years of experience, I look at things through the framework of principles. We are temporary. We care about what will benefit the nation." If something like this is included in the constitutional changes, then we will walk on with the predestination of our party." Criticizing the opposition for their stance, Erdoğan says, "We have never said anything was imperative to us."

'DETENTIONS IN FEBRUARY 28TH CASE WILL DROWN THE NATION'

Erdoğan commented on the fourth wave of arrests which transpired yesterday in connection to the investigation into the February 28th, 1997 'post modern coup'. "To be honest, this situation disrupts the peace of our society. We are also quite seriously uncomfortable with it. I mean the steps that need to be taken should be and it should come to an end and pass. However, when waves come one after the other, then I am sorry but the country will drown in those waves. I don't think this issue should be drawn out to this extent," said the Prime Minister.

'ONE RELIGION' EXPRESSION A SLIP OF THE TONGUE