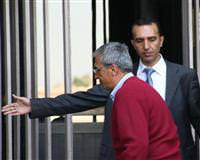 Eleven active and retired generals, out of the total 15 detained on Tuesday in the fourth wave of raids in a month, have now been arrested pending trial.

In the fourth wave of arrests in connection to the investigation in the February 28th, 1997 'postmodern coup', 17 suspects were detained, two of which were questioned and subsequently released while the remaining 15 were transferred to the courts.

The five retired officers arrested were transferred to the Sincan Prison while the six active officers were taken to the Mamak Military Prison.