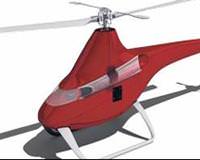 Istanbul Technical University along with the Ministry of Defense has produced Turkey’s first domestically produced unmanned aerial vehicle. The ARIKOPTER will be able to scan an area from 200 kilometers’ distance as well as remain still in the air, allowing for the capturing of detailed imagery.

İTÜ Aviation and Aerospace Science and ROTAM Assistant Director Prof. Dr. Alim Rüstem Aslan states that they have been working in conjunction with the State Planning Organization since 2002 in order to realize Turkey's first civilian helicopter the 'ARIKOPTER' project.

Explaining that four years ago, the unmanned aerial vehicle project began under İTÜ Rector Prof. Dr. Muhammed Şahin's direction Aslan states, "We tested the first prototype for two years. We worked in conjunction with a number of industrial establishments in order to ensure we did the best. We were able to finish the second prototype in just nine months, because we were able to obtain certain supplies early."

Aslan explains that the Arikopter will be able to operate by both remote control and autopilot and will be able to stay in the air for two hours and to go 200 kilometers' distance. "It is especially suited to providing border security, searching for mines and exploratory observation. The most significant feature is the fact that it can remain still in the air. Other unmanned aerial vehicles need a runway in order to take off and land. A helicopter does not necessitate such a thing. This offers great flexibility. As long as the geographical area is well established, then foggy or cloudy weather will not be a deterrent. If a night-vision camera is used then it is possible to see at night. Both the press and the police could also use it. The total take-off mass is 90 while the carrying capacity is 25 kilos. It is four meters long and one meter high. Its operating ceiling is 3,000 meters. It is able to hold a wide-scale night and day vision thermal camera."

Explaining that they will be delivering the project once the test flights are completed, Aslan states, "The next one will be even better. There are not many countries able to manufacture in this area. At present we are unable to make engines, however production projects have already begun in Turkey. In the next five years, Turkey will be able to produce its own turbo jet engine. And İTÜ is a partner in this project."