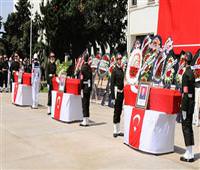 Information has surfaced pointing to the possibility that the recent attack in Hatay, which resulted in the deaths of three soldiers, was actually planned three months ago in PKK camps set up along the border. The camps, established as a base to stage attacks in Turkey, house 500 PKK terrorists which are also appointed to support the Assad regime.

This most recent attack took place on Thursday, when PKK terrorists staged a rocket attack on a Special Gendarmerie Forces team from a forested area in the Amanos Mountains. Intelligence Commander Erhan Dikmen, First Lieutenant Aytaç Kaya and Lieutenant Ahmet Tarım were killed in the attack.
Intelligence units investigating the incident are now considering the Syria factor. Intelligence points to orders coming from Kandil for the PKK's establishment of camps in the region three months ago. The three camps are stated to be located in the surroundings of the town of Raco. Dr. Bahoz who goes by the code name Fehman Hüseyin was supposedly appointed as commander of the camps situated near the border.

The terrorist organization supposedly planned to use these camps as a base to stage attacks against Turkey. The terrorist presence was also intended to suppress potential uprisings in the region, which would in effect assist the Assad regime. The camps are stated to house approximately 500 terrorists and are equipped with equipment, generators and medical centers in addition to full training facilities.
Intelligence sources state that the PKK's Europe leader Mustafa Karasu, held a meeting with Bashar Assad's assistants and Al Mukhabarat officials. Permission was supposedly granted to the PKK to set up camps, based on the stipulation that they would not allow the opposition to pass through Kurdish regions.

Following Thursday night's attack, which led to the deaths of three soldiers, gendarmerie and Special Forces staged an operation in the Amanos Mountain. The teams have moved on through Osmaniye to the region adjacent to Kahramanmaraş.