Israeli commanders to be arrested upon entry into Turkey 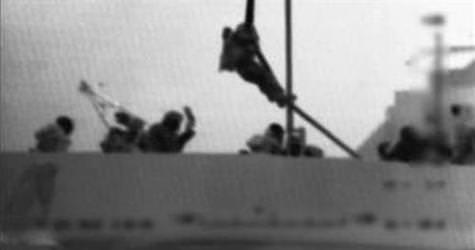 Turkish Prosecutor Ekinci has prepared an indictment seeking life sentences for four former Israeli military commanders over their alleged involvement in the 2010 killing of nine Turks on the Mavi Marmara Gaza-bound aid ship.

SABAH has acquired details of the 144-page indictment prepared by Prosecutor Mehmet Akif Ekinci on the Mavi Marmara raid which resulted in nine deaths and seriously damaging Turkish-Israeli ties. In the indictment, Israel's former Chief of General Staff Rau Gabi Ashkenazi and three other retired senior military commanders are accused of involvement in the raid and are referred to as "fugitive suspects". The indictment seeks life sentences for all four of the commanders. With warrants out for their arrest, this basically means that should the suspects attempt to enter Turkey, they will be subject for detention.


IN TIME FOR THE SECOND ANNIVERSARY OF THE MAVI MARMARA RAID

Correspondence from the Turkish prime minister's office, the foreign and justice ministries and the intelligence service also helped Prosecutor Mehmet Akif Ekinci draw up the indictment. The 144-page indictment was prepared after testimony from some 600 people, including 490 passengers from the six-ship flotilla and relatives of those who had died.

According to the information obtained, the first section of the indictment details the events that transpired. The second section evaluates the violent attack from an international legal standpoint. In this section, the principles listed in the Israeli prepared Turkel report on the Mavi Marmara raid are refuted one by one in light of international legal standards.

The third section of the indictment serves as a history lesson for sorts for Israel as it goes on to detail the extensive relations between Turks and Jews spanning all the way back to the Ottoman Empire. Ekinci mentions how the Ottomans took in the Jews that were exiled in 1492 by the Courts of the Spanish Inquisition. The indictment also recalls how Atatürk, the founder of the Turkish Republic, took in 20,000 Jews during the Nazi era and granted them Turkish passports, thereby saving them from being sent to concentration camps. The indictment states that when viewed from this perspective, Israel is indebted to Turkey for its existence today.

In the final section of the indictment, Prosecutor Ekinci evaluates the incident in accordance to the Turkish Criminal Code and requests that former Israeli Chief of Staff

MILITARY DRILL FOLLOWED BY A MASSACRE

The indictment states that Israeli soldiers fired upon determined targets resulting in the deaths of unarmed victims, which thereby qualifies as being the use of disproportionate force. Prosecutor Ekinci points out that it is evident upon the inspection of forensic reports that two of the passengers were killed from shots by Israeli soldiers while they were still in the helicopter. This detail renders invalid Israel's claim that they opened fire in response to resistance once they boarded the ship. The indictment also notes that according to autopsy reports, a number of the killed victims had sustained more than one bullet shot. In addition, the fact that some of the deceased were killed at close range and from a chain of shots, displays the savagery of the incident. The indictment also mentions that prior to the raid, Israeli soldiers had staged a 'massacre drill' on a ship resembling the Mavi Marmara.

Gilad Shalit, the Israeli soldier who was exchanged for 1,027 Palestinian prisoners in months past was also mentioned in the indictment as an example of the implied value of the lives lost in the raid. "In order to save one soldier, the Israeli state was willing to release 1,027 Palestinian convicts. Israeli needs to understand that the Republic of Turkey, which is a democratic, secular and social state of law also regards all of its citizens lives as sacred, regardless of language, religion, race, philosophy, beliefs, political affiliations," reads the indictment.