Gül becomes the first president to ride in driverless car 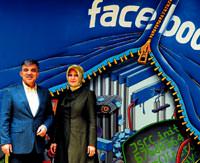 President Gül visited Google, Facebook and Microsoft during his trip to San Francisco. Google’s Brin took the president on a ride in their new driverless car.

President Abdullah Gül has become the first state leader to test drive Google's newest innovation. As part of his tour of San Francisco, President Gül paid a visit to Google, Facebook and Microsoft. While meeting with the Turks employed at the Google headquarters, Sergey Brin one of the co-founders of the firm, presented Gül with a very special surprise. Google Technology Chair and Executive Board Member Brin took Gül and his wife Hayrünnisa for a ride in the company's new driverless car, prior to the project's official release. Gül and the First Lady sat in the backseat to enjoy a ride in the vehicle which has yet to be tested out by President Obama, making Gül the first state leader to try out the driverless car. These vehicles, which operate using Google Maps services for navigation and reaches destinations according to coordinates in order to find the shortest routes, also successfully decreases the risk of accidents by half.

Relaying his experience in the driverless vehicle, Gül stated, "After a short period of time, they turned on the car's automatic system. We went up to 80 miles (130 kilometers) on the highway. It was wonderful. The driver doesn't have to do anything. Sergey Brin said that he uses this car to commute to work. In San Francisco the traffic regulations are extremely tough. I asked who the ticket would be written to if the car committed a traffic crime. They said because there is no chance of it being caught intoxicated they don't receive tickets." Explaining that it was Brin who suggested they try out the car, Gül stated, "The car was entirely controlled by the automatic system. When it detected a truck ahead of us that was going slow, it slowed down on its own and then later sped up again.
Although the car can't see, it has been completely designed to drive safer than any human. It is extremely successful."

A Turkish woman is overseeing Google's driverless car project; Seval Öz, who also happens to be the sister of the well-known doctor Mehmet Öz.

Gül also had the chance to try on another Google innovation called Google Glasses. The President even watched a film wearing the special navigation glasses. Gül also checked out the Tarabya Palace from the headquarters' huge Google Earth screen.

After his visit to Google, Gül later spoke with journalists at Microsoft. The president was asked whether the speculation that he plans to become a candidate for NATO Secretary General when his term of presidency is over. Gül responded by stating, "It is very nice that Turkey is being mentioned in connection to such an important position, however I am not considering becoming a candidate."

'THE FATİH PROJECT IS THE PRIME MINISTER'S'

After visiting Google, Gül went on to stop at both Facebook and Microsoft, where he introduced the Fatih Project, which involves providing tablet computers to schools in Turkey. When it was brought up that Gül is extremely active in technology, while the Prime Minister is not as active in social media, Gül stated, "Yes, but the Fatih Project is the Prime Minister's".

Mentioning that a number of Silicon Valley firms expressed interest in the Fatih Project, Gül states, "There will be a lot of competition; however we need to not think about this as being a purchase. We must act in accordance to Turkey's benefit. This project will be a significant pilot application for these firms."