'Abortion is not a right' 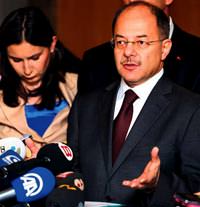 Noting that abortion became a fait accompli during the September 12th coup era, Minister of Health Recep Akdağ states, "Both myself and the Prime Minister are in favor of life.”

Responding to questions from the press on the global No Smoking Day, Minister of Health Recep Akdağ also commented on the recently sparked debate on abortion. Akdağ explained that an academic committee is evaluating the topic in a report which will be presented to the Council of Ministers in June. Mentioning that abortion in Turkey became a fait accompli as part of the laws established in the September 12th, 1980 coup, Minister Akdağ states, "We know that the issue of abortion is widely discussed throughout the world. Of course, we are going to do the same. We want this to be a Turkey which debates. This is what befits a democratic nation. Mr. Prime Minister and I are in favor of life. There are also those that defend women's choice. Therefore, this debate will continue and we will bring it to an end in a healthy manner."


Akdağ also responded to a journalist's request for the minister to explain his recent statement that the state would care for children born from rape. "What I am saying is that if abortion is made illegal due to the threat it poses against both the mother and the baby's life, then these sorts of issues may be debated. If that is the case, then I said that of course the state would care for children born out of such contention. The state should not leave these children uncared for and it won't. However, we have not made any such decision.

At present the unconditional option of abortion is available for women that are up to ten weeks pregnant. Whoever wants to can go ahead and have their baby scraped from their belly. Why is it that the press, women's organizations and those involved with human rights never emphasize this aspect of abortion? Abortion means using a knife to scrape out a ten-week old baby, who has developed arms, legs a body and heartbeat and is beginning to form its own circulation system, from the belly of its mother."

Also pointing out that caesarean is a surgery, Mr. Akdağ states. "Why can't they give birth naturally? If the first birth is done through caesarean, they say the second birth could be done naturally, however it could be dangerous. Our citizens should not be recommended to have caesareans. This is where I have a conflict of knowledge with my colleagues. If you convey that there is danger to an individual or their family, they are willing to do whatever you suggest."

Turkey's Ministry of Health released an announcement for May 31st World No Smoking Day, in which it was stated that the number of smokers in Turkey has dropped by 35 percent since 2008. Throughout the world there are 1.2 billion smokers over the age of 15. Sixteen million of that figure is the number of smokers in Turkey. Turkey's first regulation against smoking was done in 1996 and in 2009; smoking was prohibited in enclosed public spaces.

ONE OF THE MOST SUCCESSFUL FOUR COUNTRIES

"As a result of our fight against tobacco products, the 33.4 percentile figure for smokers over the age of 15 in 2006 has now dropped down to 27.1 percent. In 2008, approximately 2,200,000 people quit smoking. According to the criteria established by the World Health Organization, Turkey is amongst the top four most successful nations in the world in the fight against smoking," stated the announcement.