We have stood tall against terrorism! 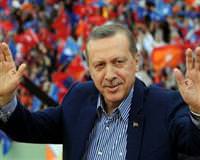 On Sunday, Prime Minister Erdoğan spoke at the AK Party Şanlıurfa District Congress, where he addressed the issue of terrorism, development and the growing support for the AK Party.

The following are a number of headlines from the Prime Minister's impressive speech.

"For decades, this region was let up to its own fate. The necessary investments were not made into this area. As the AK Party, we have said 'stop' to these games being played within games. We are Turkey's party and not one that belongs to certain ethnicities or beliefs. We are a party formed by this nation and we follow the path created by this nation.

In 2002, 49 percent voted in support for the AK Party. In 2011, once again 62 percent said 'AK Party'. What do they say to us from Şanlıurfa and from Kırıkkale, they say 'solve the terrorist issue, solve the Kurdish issue'… This scene is the same in all of our provinces. We have reached where we are today by having increased our votes in each of the nation's 81 provinces. We are well aware of the heavy responsibilities we bare. We have displayed an extremely strong stance when it comes to the issue of terrorism and we have never taken a step back when it comes to democratization. As long as the nation is behind us, we will continue to try to embrace as brothers all 75 million of our citizens.

As we attempt to solve this issue, there are others who are stubbornly exerting efforts to ensure a solution is not reached. While we say, 'don't let mothers cry, others are trying to make that very thing happen. We say that mothers should not cry and others try to instigate the situation by saying terrorists should stay up in the mountainsuntains.

We have touched every issue they said was untouchable and we have taken all dirty ties to court. We have struggled against the mafia, criminal organizations and the junta. We will not leave these squares, these stadiums in the hands of exploiters and blood merchants

They want you to remain impoverished. They however are nourished from abuse, from blood and from tears. What we call for is service. There is no provocation that could be an obstacle for us.
We will not allow agents amongst us. We should also never allow masked provocateurs who have certain intentions. We should not allow those both from within and outside of the country who are trying to send terrorists in the mountain to their deaths.

I believe we will have an explosion of votes in Şanlıurfa, which will provide an example for all of Turkey.
We are conducting the official opening ceremonies of 747 million liras worth of investments. Today we will be officially opening the 91-kilometer Şanlıurfa-Viranşehir road for service. We are setting up a GAP renewable research center within the Harran University structure. We will be building a 1,700 bed city hospital in Şanlıurfa. Once we have completed the infrastructure work on the hospital, which we plan to operate according to the joint-private model, then we will begin building. Through Turkey's Housing Development Administration (TOKİ), we have begun working on building 486 residences. Once the GAP Action Plan is completed it will bring in 2.2 billion dollars. We are also designating an 853-hectar area for animal husbandry. We will be transforming Şanlıurfa into a global city."