A new era to start in Syria 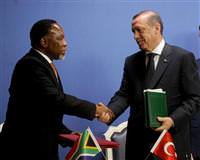 Prime Minister Recep Tayyip Erdoğan stated that Kofi Annan’s recent statements point out that the promises made were not kept when it comes to Syria. Mentioning that UN Secretary General Ban Ki-moon also insinuated that the Annan process is coming to an end, Erdoğan stated, “These are signs of the start of a new era in Syria.”

Prime Minister Recep Tayyip Erdoğan was speaking at a joint press conference with South Africa's Deputy President Kgalema Petrus Motlanthe following a one on one meeting and the signing of an agreement to form a commission between the two countries.

This was the first time the two have met since Prime Minister Erdoğan's October, 2011 visit to the Republic of South Africa. Expressing that relations with South Africa have been developing positively, Erdoğan pointed out that in 2010 the two nations shared a 1.2 billion dollar trade volume, while in 2011, despite the crisis, that figure went up to 2.4 billion dollars. Erdoğan went on to state that these figures are not actually representative of the potential between Turkey and South Africa.

Prime Minister Erdoğan expressed that he believed that this trip and the meetings held between mutual ministers of defense and energy would result in significant steps in the future and that there are many areas in which Turkey and South Africa could collaborate, including information technologies.

"We also had the opportunities to discuss regional issues in which the situation in Syria was discussed. It was then I saw that our perspectives on the matter line up. What really matters is stopping this ruthless massacre in Syria, this massacre, which has practically turned into genocide. As you know, yesterday firing from tanks resulted in 100 deaths in Hama, today it was the same."

Erdoğan went on to state that Kofi Annan's recent statements show that the promises made by the Syrian administration were not kept and mentioned that UN Secretary General Ban Ki-moon also insinuated that the Annan process is coming to an end. "These are signs of the start of a new era in Syria," states Erdoğan. "My heartfelt with is that humanity will now collaborate in order for us to take the necessary steps when it comes to Syria. This way, we will all have helped save innocent people from oppression."

Responding to questions on the situation in Syria, Erdoğan recalled a three and a half hour meeting held with Assad in the beginning of 2011 when he went to Aleppo for the ground-breaking ceremony of a dam over River Asi.

''During that meeting, we discussed a number of issues such as the developments in North Africa and the internal issues in Syria. In fact, we have had very good relations with Syria over the past seven to seven and a half years. Our families have also been on good relations. Our President, our foreign minister and I continuously made efforts to further develop relations."

Emphasizing however that Syrian leader Assad has yet to keep a promise, Erdoğan stated: ''Bashar, who has yet to fulfill his promises made during this process, continues to brutally rule his people. Can you imagine going into neighborhoods with tanks and weapons and killing your own people to silence them? Of course, those killed are now silent. However, while they may think those killed have been silenced, there is one thing that cannot be silenced and that is humanity. Humanity cannot be silenced. The people of the nation will also not be silent and there is no power that can stand in the way of the people's will, including a regular army.

In my opinion, with each passing day the Syrian opposition is getting closer to their objective. Bashar is trying to remain standing with the support of just a few countries.''

-''Bashar Assad is on his way out. He cannot stay in power, sooner or later he'll be a goner."

''The world is now against Bashar," states Erdoğan, who went on to point out that UN Secretary General Ban Ki-moon on Thursday emphasized that the Assad administration has lost all legitimacy.
''There needs to be UN observers throughout Syria in order for us to be informed of what is happening all over the country. As you see, when they went to the village of Al Qubayr, observers were shot at. There have been no cases of deaths, however they are being shot at and they saw that people had been burned to death. They saw people whose throats were slashed. Only a person like Assad could be so brutal. What he is doing is direct barbarism and persecution. You cannot prosper through cruelty. This is a saying of ours. You can never remain standing through cruelty.

As a country sharing a 910 kilometer border, we will not remain silent. I want to make it very clear that Bashar Assad is a goner. He just cannot remain in power here. Sooner or later he will have to go. Right now, Assad is preparing his own end. Who is it that is helping? You already know, however I discussed the issue during my trip to China and visit to Iran and through a telephone conversation with Russia. If we can fit in a meeting with Russia, we will do so otherwise I will discuss the issue with Russian President Putin during the G-20 Summit.

Of course the Russian Federation has now put forth a new proposal. They are trying to establish their own international meeting. We do not know who will attend, however as Turkey we will, it's no problem. Our foreign could meet with his Russian and Chinese counterparts. What is important here is finding a solution. There is also the upcoming G-20 summit in Mexico. We will be there in two weeks from now. I am sure what sort of steps we will take and a road map will be established there, however at this point the UN Security Council, the Arab League and the Organization of Islamic Coordination will all be instrumental. The steps they take will determine our own."