An announcement from Özal 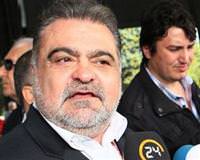 Following the release of the State Advisory Council (DDK) report into the untimely death of Turkey’s eighth President Turgut Özal, his son Ahmet Özal has also spoken on the matter. Commenting that his father’s death was not normal, Ahmet Özal stated, "There was a stretch of time that began with the death of Uğur Mumcu. In fact all of the deaths that took place in the 1990’s should be investigated.”

Ahmet Özal responded to questions from the press regarding the recently released DDK report on the death of his father and Turkey's eighth president Turgut Özal at the Atatürk Airport VIP Lounge. "Everyone knows that my father's death was not a normal one," states Özal, who went on to emphasize that the era which followed the death of Uğur Mumcu needs to be carefully looked into.

Expressing that he has not read the DDK report on his father's death, Ahmet Özal stated that an autopsy had not been done on his father, however it should have been. "There are serious suspicions. Some mention phosphate poisoning. Whether or not his grave will be exhumed is of course something the court will decide. From our perspective it is not a good thing to disrupt the dead. We have already known for years now that his death was not normal and that he didn't have any sort of heart disease. However, it has now begun to surface. It has gone beyond exhuming his corpse in order to determine whether or not he was poisoned. It is now the will of God. He has passed. Everyone already knows that his was not a normal passing. It is well known that he was poisoned. There is nothing interesting about that," states Ahmet Özal.

'THE DEATHS OF MUMCU, HABLEMİTOĞLU, ÖZAL AND KIŞLALI NEED ALL BE INVESTIGATED'

Ahmet Özal went on to state, "The deaths of Eşref Bitlis Pasha, my late father, Dr. Necip Hablemitoğlu, Ahmet Taner Kışlalı and Çetin Emeç are incidents that are intertwined, especially in the start of the 90's. These deaths and the incidents that led to the February 28th coup need to be further investigated. They are all interconnected. None of these incidents are independent of one another. It is not crucial to conduct an autopsy in order to look into this era. An autopsy could be conducted, or not. What it truly was is already obvious."

'WE DON'T EVEN HAVE A STRAND OF MY FATHER'S HAIR'

The late former president Turgut Özal's son also added that they don't' even have a strand of their father's hair.