'Violence and politics cannot stand side by side' 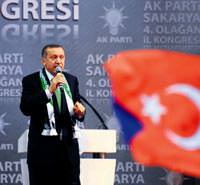 Speaking out against BDP and MHP by stating that they exploit the concept of nationality, Prime Minister Erdoğan said, “Instead of using words, they consider violence to be a tool. In a place where there is violence, there cannot be politics.”

Speaking at the AK Party's Sakarya Congress, Prime Minister Recep Tayyip Erdoğan relayed a series of messages to the Peace and Democracy Party (BDP) and the Nationalist Movement Party (MHP), which have been criticizing the state's attempt to reach a solution to the Kurdish issue.

I HAVE MADE THREE REQUESTS FOR A MEETING: MHP does not conduct politics, nor does it produce politics, quite the contrary, they act with the reflex of a despot, authoritarian state. Politics is solving problems through expertise, dialogue and compromise. Those who do not even attempt to talk must have nothing to say. I have requested a meeting with MHP Chairman Devlet Bahçeli three times and he has yet to respond.

THEY DO NOT SHUN VIOLENCE: Just like the MHP, BDP is also trying to remain standing through exploiting the concept of race and nationality. Instead of putting forth ideas, instead of saying something, they perceive violence to be a tool. Violence and politics can absolutely never coexist. There are no politics where there is violence and there should never be violence where there is politics. Politics is only possible when violence is completely shunned. However, they do not shun violence, because they are under threat. They do not distance themselves from violence or terrorism.
Ten years ago when I said I would build an airport for Hakkâri, Şırnak and Iğdır nobody believed me. Now roads are being made built and tunnels are being dug. We are coming through the mountains and hope to surpass them.