Obama to Erdoğan: We are by your side 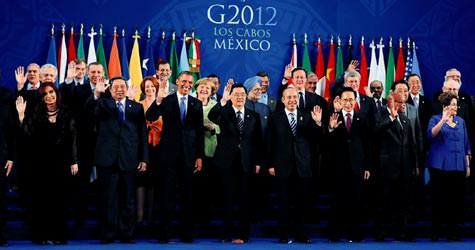 Prime Minister Erdoğan and U.S. President Barack Obama had the opportunity to meet yesterday while attending the G-20 summit in Mexico. While Erdoğan brought up the issue of Turkey’s purchasing Predator’s, the United States’ unmanned aerial vehicle, Obama offered his assurance, stating, “My country stands by you in the fight against the PKK.”

The meeting started as planned at 22:15 last night. Prime Minister Recep Tayyip Erdoğan was joined by Deputy Prime Minister Ali Babacan, Foreign Affairs Minister Ahmet Davutoğlu, Finance Minister Mehmet Şimşek and AK Party Vice-Chairman Ömer Çelik. The meeting was scheduled for 30 minutes, however went on for 40 minutes. During the meeting, Erdoğan made a reference to the recent terrorist attack in Dağlıca while expressing their determination in the struggle against terrorism and the importance of the United States' support when it comes to intelligence-sharing. Obama in return supposedly offered his condolences to Erdoğan and stated, "My country stands by you in the fight against terrorism. The American public deeply shares the pain suffered by the Turkish public." According to sources the issue of Ankara's request for the U.S. Predator drone in order to strengthen its hand in the fight against terrorism was also an issue tackled during the meeting. At a prior meeting between the two state leaders, Obama had told Erdoğan, "The issue is on our agenda. We are working on it. However, we have to surpass the obstacle of the congress. Let's work on this together."

THE SITUATION IN SYRIA
Another main item on the agenda of the Erdoğan-Obama meeting was the situation in Syria. Both leaders confirmed they were in consensus regarding the responsibility of the Assad regime for the incidents that have transpired in the nation. Both leaders relayed information on recent meetings held separately with Putin. According to an announcement released by the Prime Ministry, the meeting primarily dealt with Syria, and both parties expressed their concern as the situation in the country worsens as each day passes and called on the international community to fulfill their obligations."

A SURPRISE MEETING
Prior to meeting with Obama yesterday, Prime Minister Erdoğan also held another surprising meeting, this time with Chinese State Leader Hu Jintao.
The two leaders shared ideas in regards to Syria, while Erdoğan relayed information from his meeting with Putin. Erdoğan also requested from Jintao, that China take on a more active role in halting the bloodshed in Syria. According to information obtained, Jintao offered Erdoğan his condolences. Meanwhile, Prime Minister Erdoğan also met with German Chancellor Angela Merkel and the two supposedly tackled regional issues.

DECISION REACHED ON TAKING JOINT ACTION FOR SYRIA
During the meeting between Erdoğan and Russian State Leader Vladimir Putin, the two leaders decided to work together on the Syria issue, as orders were given to both nations' Foreign Affairs Ministers Ahmet Davutoğlu and Sergey Lavrov to conduct joint efforts from here on out when it comes to Syria. The Erdoğan-Putin meeting lasted approximately 40 minutes.

EURO CRISIS MAKES ITS MARK ON MEXICO SUMMIT...
The G-20 Summit which brought leaders from 20 of the world's largest economies to Mexico came to an end yesterday. The outcome of the meeting which focused on the crisis and its effects on the Euro zone was to work together on the euro crisis in order to rectify the global economy and create employment opportunities.