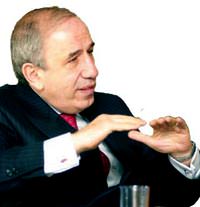 The sixth wave of operations in an investigation into the February 28th, 1997 ‘postmodern coup’ has targeted a number of former members of the Higher Education Board. With warrants issued for former head of the Higher Education Board Chairman Kemal Gürüz and three other former board members, this sixth wave of operations marks the first time the investigation into the 1997 unarmed military overthrowing of the coalition government has stretched to include civilians.

Warrants were issued for four former members of Turkey's Higher Education Board (YÖK), including the chairman at the time Kemal Gürüz. Former board members Erdoğan Öznal as well as Kenan Deniz and Sedat Arıtürk, both retired major generals, were the others called in testify.

While Gürüz and Erdoğan Öznal, who are supposedly vacationing abroad, were unable to be located, retired generals Kenan Deniz and Sedat Arıtürk, who are also some of the most stand-out names involved in the General Staff's West Working Group at the time, were detained by security forces.
The sixth wave began yesterday morning when Special Authority Prosecutor Mustafa Bilgili, who is responsible for conducting the February 28th investigation, sent a directive to the Istanbul Police Department requesting the four former YÖK members be detained and brought to Ankara.
Police were able to take Kenan Deniz and Sedat Arıtürk into custody, locating them at their given addresses, while Kemal Gürüz and Erdoğan Öznal were unable to be located.

After hearing word of the warrant out for Gürüz's arrest, his prosecutor Sedat Aksallı supposedly stated that he has contacted his client Gürüz, who is currently vacationing on a boat abroad, however will be returning to Turkey on Sunday to turn himself in to testify.

After being detained, Kenan Deniz and Sedat Arıtürk were first brought to the Istanbul Çağlayan Court where they underwent medical check-ups. Later, they were brought to Ankara where they underwent questioning. After testifying they were transferred to the court with requests for their arrests. The court ruled for Deniz to be held in custody pending trial, while Arıtürk was released.


Kemal Gürüz, who is at the same time a suspect in the Ergenekon case, served as the head of the Higher Education Board during the February 28th era. Appointed to lead YÖK in 1995 by the President at the time Süleyman Demirel, Gürüz released a series of memorandums during the February 28th period in order to prohibit the wearing of headscarves in university. He was also the architect of the co-efficient system which rendered it significantly more challenging for graduates from religious vocational schools to be able to attend university. During Gürüz's era in charge, a number of teaching staff were also forced to resign.