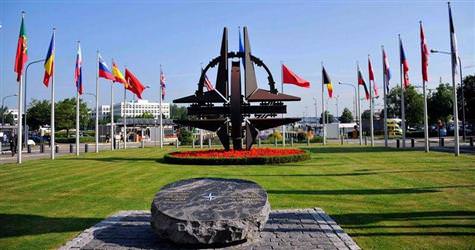 Turkey will be calling for backing from its NATO allies on Tuesday at a special meeting called after Syrian troops shot down a Turkish warplane last week. Should NATO embrace a joint stance with Turkey, measures to establish a sea and airspace blockade may be introduced.

It is only the second time in NATO's 63-year history that it has convened under Article 4 of its charter which provides for consultations when a member state feels its territorial integrity, political independence or security is under threat. In a letter to the U.N. Security Council, Turkey condemned the "hostile act by the Syrian authorities against Turkey's national security", saying it posed "a serious threat to peace and security in the region".

Deputy Prime Minister Bulent Arınç told a news conference Syria's actions "would not go unpunished".
The unarmed reconnaissance jet had briefly entered Syrian airspace as it approached land after patrolling the eastern Mediterranean, Arınç said, but was warned by Turkish radar controllers and immediately left and turned again out to sea. It then made another approach to land when it was shot down 13 miles off the coast in international airspace, he said, out of the reach of Syria's anti-aircraft guns. "According to the data in our hands, it points to our plane being shot by a laser or heat-guided surface-to-air missile. The fact our plane was not given an early radar warning, suggests it was not a radar-guided missile," said Arinc.

By invoking Article 4 of the NATO charter, rather than Article 5 which calls for military action, Turkey has signaled it wants action against Syria short of armed intervention. Turkey has called for the NATO alliance to meet today in an extraordinary meeting geared towards determining the road map to be drawn against Syria. Ankara plans to act according to a two-stage plan. The Council meets today at 11:00 and details of the Turkish F-4 Aircraft being hit in international waters will be relayed primarily using NATO radar records.

If following this meeting, Turkey decides to make the request for a blockade to be established against Syria, this move may be made by the NATO Alliance. In this case, measures may be taken to establish a 'blockade' of the Eastern Mediterranean from both air and sea. Such measures may involve NATO's emergency response forces being on alert, the region being monitored by Awacs and the deployment of NATO naval forces in the region. Turkey may also broaden the economic sanctions already at hand and Syria's borders may be closed for crossing. Following today's NATO meeting, the issue is expected to then be brought up to the United Nations by the United States and England. However, the issue is not expected to surpass a potential veto from Russia.

Should the crisis deepen, Turkey is prepared to move on to Stage Two which would involve evoking the NATO Alliance' Article Five, which would mark the first time the article will be called into action since September 11th, 2001.

Ankara's was not convinced the by the recent announcement made by Syrian Foreign Affairs Spokesman Makdissi, who called the act one of 'legitimate self-defense'. Turkey also points out that they have presented their own radar records, while Syria has not and that Syria has denied responsibility for their actions from the start. Although Prime Minister Erdogan will be addressing the nation today in an AK Party group meeting, he is not expected to announce any additional sanctions until the missing pilots have been located. Turkey's primary objective is recovering the wreckage and locating the pilots.

The British Press: OUR PLANES ARE READY TO OFFER SUPPORT

In response to Syria's downing of a Turkish fighter jet, Britain's Daily Star Newspaper has written that English warplanes are ready to offer support. Meanwhile, Foreign Affairs Minister Ahmet Davutoğlu has since spoken with his Moroccan, German and Italian counter parts all which delivered the message, "We are by your side."