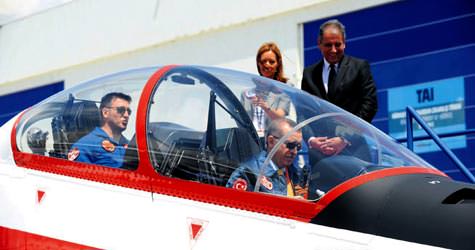 Prime Minister Tayyip Erdoğan was the first person to get into the cockpit of Turkey's first national jet, which was released from the hangar in a ceremony yesterday.

Speaking at the ceremony, Prime Minister Erdoğan offered his condolences for the recent terrorist attack in Eruh and delivered a number of messages on Turkey's fight to stop terrorism.

"I want to sincerely express once again that with the nation's rising politics, economy and military force, day by day, Turkey will overcome this cursed terrorism. In fact, my presence today for this program, is the most evident indicator of our determination."

Prior to the commencing of Wednesday's ceremony, Prime Minister Erdoğan had the opportunity to visit the Turkish Aerospace facilities accompanied by Chief of General Staff Necdet Özel and Armed Forces Commanders, where he was shown a test flight of the ATAK, Turkey's first national helicopter. Erdoğan was also given a presentation by commanders of Turkey's first unmanned aerial vehicle the ANKA, which will be added to the military inventory next month.

Erdoğan expressed how pleased he was by stating, "I am so grateful, I have seen the day, we now have our own drone." Erdoğan also expressed how proud he was to witness the ATAK helicopter as it maneuvered and stated that within the next year or so, Turkey will have its own fighter helicopter produced at these very same facilities.

"The final efforts are being made in order to send the Göktürk observation satellite into space and we are extremely pleased and proud.

Our aviation history, which began in 1911 with two imported airplanes, has reached a level where we now manufacture our own planes, helicopters and satellites. Turkey has now become a leading global nation when it comes to its defense industry." Reminding that the Turkish Armed Forces is one of the oldest and strongest militaries in the world, Erdoğan stated, "We are now able to equip our military with our own manufactures, works put forth by our own technicians and engineers."

140 Engineers were on board the building of Turkey's 'Free Bird'

The Hürkuş, otherwise known as the Free Bird, is able to reach a maximum speed of 574 kilometers an hour. The aircraft has an elevation capacity of 10,577 kilometers and is able to remain in the air for a total of four hours and 15 minutes at 15,000 feet without necessitating further oil supply.
The aerodynamic aircraft also has the capacity to rescue pilots at zero speed and elevation. In addition the plane contains an oxygen producing system for pilots that operates while the plane is engaged in flight.

For the next four to five months period, the plane will undergo a series of ground tests in order to receive permission to fly. Afterwards, the Hürkuş will undergo almost 500 flight tests after which within 12 to 13 months time it will be ready for manufacture. There were 140 engineers and 70 technicians involved in the aircraft's manufacturing process.

According to officials, this plane, which is described as being the best in its class, will be able to be sold abroad and especially to Arab nations as soon as it receives its flight stamp.