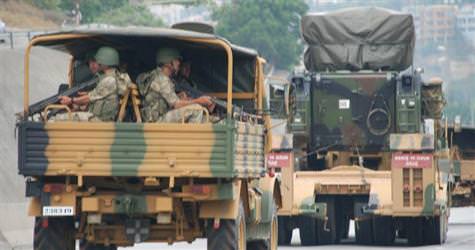 A first substantial convoy of about 30 military vehicles, including trucks loaded with anti-aircraft missile batteries dispatched from Turkey's coastal town of Iskenderun, was moving slowly towards the Syrian border 50 km (30 miles) away.

Early on Thursday, another convoy left a base at Gaziantep and headed for Kilis province, the site of a large camp for Syrian refugees.

Turkish Prime Minister Tayyip Erdoğan, who has given shelter in the border area to rebels fighting Syrian President Bashar al-Assad, announced after Syrian air defenses shot down a Turkish warplane last Friday he would step up security there.

The convoy was first seen Wednesday, escorted by police cars, as it head along a narrow highway leading out of the main port of Turkey's Hatay province. It included rocket launchers on transporters, anti-aircraft artillery and military ambulances.

The deployment began just two days following Prime Minister Recep Tayyip Erdoğan's announcement that Turkey had revised its military rules of engagement against Syria. Erdoğan also said any military element moving towards the Turkish border and deemed threatening would be declared a military target. The preponderance of air defense weapons in the convoy suggested Turkey was preparing for any possible approach by Syrian helicopters or warplanes.

According to the information obtained, the military vehicles will be dispersed amongst locations at the Cilvegözü Border, and the Reyhanlı, Yayladağı and Altınözü districts of Hatay as well as to military installations in Sanliurfa.