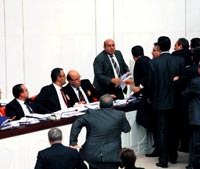 After lengthy deliberations in Turkey's Grand National Assembly, the tenth article of the Anti-Terrorism Law has been amended to include the eradication of Special Authority Courts. From here on out, cases involving terrorism will be tried by High Criminal Courts. The amendments adopted by the parliament involving the judiciary system are as following:

The Supreme Board of Judges and Prosecutors will be responsible for assigning the prosecutors to serve at High Criminal Courts, which will now be in charge of handling all crimes dictated by the Turkish Criminal Code. Meanwhile, Special Authority Courts will remain in operation until the 22,000 files they are currently overseeing are concluded.

From here on out, permission will be required to try members of the National Intelligence Organization or others individuals that have been personally appointed by the prime minister.

Periods of detainment by Special Authority Courts, which previously were up to seven days, will now be contained to just 48 hours. The motion passed in parliament also includes a new concept of 'freedom judges'. These freedom judges will be in charge of making decisions in the investigation process or for example issuing warrants and detaining or releasing suspects pending trial.

A number of anti-democratic regulations upheld by Turkey's Special Authority Courts have now been lifted. Some examples of these regulations are listed below:

The assigning of a military prosecutor for crimes committed in military locales.

To issue a broadcasting ban on certain statements or actions that are damaging to public order and discipline.

Issuing declarations via the media.

Having a sole attorney present during testimonies.

Restricting attorneys from inspecting the contents of files or taking examples from such documents.

Suspects having an attorney during the period in which they have been detained.

The AK Party has also prepared a motion that foresees criminals receiving early releases. These conditional releases would be applicable to those who have less than a year left to serve and have been on good behavior.