Zana takes an initiative on the Kurdish issue 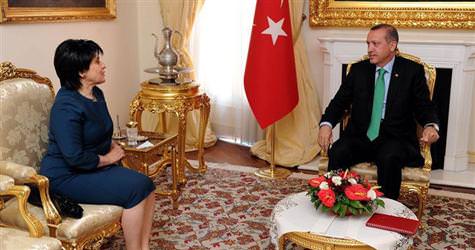 In a highly anticipated meeting, Leyla Zana, a significant Kurdish political figure, took an initiative by meeting Prime Minister Erdoğan to discuss ways to find a solution to the Kurdish issue.

During the meeting with Prime Minister Recep Tayyip Erdoğan on Saturday, Diyarbakır Deputy Leyla Zana proposed six steps that she feels will put an end to the Kuridsh issue: transferring Öcalan to house arrest, having the state issue an apology to the Kurds, to reinstate the Oslo process, to bring an end to KCK arrests and to provide general education in Kurdish.

Taking a historical step towards finding a solution to the Kurdish issue, Leyla Zana practically defied the PKK and the BDP, critics of her recent move. Zana states, "I trust in my Prime Minister and I acted with my mind and my heart. The Prime Minister is sincere."

During the meeting with Erdoğan, Zana proposed a six-item solution: The state issuing an apology to the Kurds, education in the Kurdish mother tongue and not just as an elective, reinitiating the Oslo talks and putting an end to calls to 'drop their weapons and KCK arrests.

After the meeting, which lasted an hour and a half, Leyla Zana faced the cameras for a press conference held in the parliament. Zana was accompanied by her daughter Ruken and her two nephews that also act as her security.

Taking the pulpit, Zana stated, "This is the first time in 21 years that I am speaking from this press room. I hope that this will be to establish peace. "

According to the information obtained, Zana and Erdoğan shared an interesting dialogue. Zana began the meeting by reminding of when she was thrown out of the Assembly 21 years ago for taking her oath in Kurdish. Recalling how she spent years in prison for taking an oath in Kurdish intending to establish brotherhood, Zana's words made Prime Minister Erdoğan emotional.

Zana stated, "We all paid heavy prices. There are promises I made to establish Turkish-Kurdish rights. A lot has changed since those years. The groundwork has now been established in order to reach a solution."

Prime Minister Erdoğan brought up all of the democratic steps that have been taken thus far, and emphasized that the BDP needs to alter its stance in order for the bloodshed to come to an end. Erdoğan reiterated his call for the PKK to drop their weapons, while Zana stated that the security-based policies that the government has put forth thus far to the PKK has never reaped results.

Supposedly Zana stated, "Any call for weapons to be dropped will not be responded to. Realistic and convincing steps need to be taken in order for the PKK to drop their weapons."

Zana went on to state that the only route not yet tried was holding sustained negotiations. "Therefore," stated Zana, "the Oslo meetings were a milestone and need to be restarted." The Oslo talks refer to a series of meetings between the National Intelligence Organization and PKK representatives, which took place between 2009 and 2011.

Speaking at the press conference, Zana stated, "We place high importance on the steps taken thus far, however the community does not need small steps to be taken, it needs advanced and sincere steps. Statements and promises are not enough," stated Zana who went on to list her proposal for steps to be taken in order to reach a solution.

AN APOLOGY: "States should not perceive issuing an apology to their own public as debilitating. The public that is demanding this apology is none other than their own compatriots."

HOUSE ARREST FOR ÖCALAN: "A country that managed to break down a taboo such as capital punishment could also transfer Mr. Öcalan to house arrest. This is vital."

EDUCATION IN THEIR MOTHER TONGUE: "The fact that Kurdish has been added as an elective course is a positive development; however it is still far from fulfilling the Kurds request to be taught in their own native tongue. There is no society in this world that has to pay money to learn their own language. Education in the mother tongue is a Kurdish right."

THE PRIME MINISTER IS SINCERE: "Mr. Prime Minister clearly expressed his sincere stance to keep the dialogue process open. I want to thank him for this."

PKK WARNS ZANA THAT SHE IS DISCREDITING THE PAST TEN YEARS
Of note was the lack of BDP deputies at Zana's press release. Meanwhile, Duran Kalkan, one of the PKK's leaders, expressed that in response to the search for a solution, they will be increasing armed attacks. Kalkan went on to state, "The only solution is for Kurds to become self-governing. Those who say that they believe Erdoğan will find a solution are discrediting the past ten years."