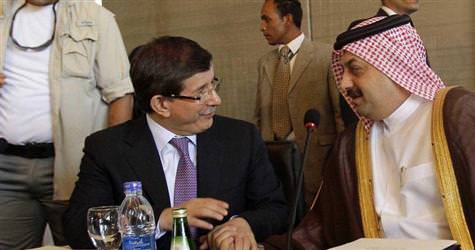 Speaking at a two-day conference held in Cairo organized by the Arab League to try to rally Syria’s opposition, Foreign Affairs Minister Davutoğlu called on the opposition to unify, unite their power and to leave personal problems aside.

The 'Syrian Opposition Conference' organized by the Arab League in the Egyptian capital was an attempt to try to rally Syria's opposition, which has been beset by in-fighting that diplomats say have made it tougher for the world to respond to the crisis.

During his address, Davutoğlu expressed that Turkey supports the Arab League's efforts to find a solution to the situation in Syria. Pointing out that Turkey has now accepted over 35,000 Syrians, Davutoğlu stated that what is transpiring in Syria now is the direct result of a despot regime using weapons, cannons and tanks to respond to the public's legitimate demands.

Davutoğlu also drew attention to the fact that the Syrian regime has yet to keep the promises made to the international community and the public and emphsized that the regime is misguided in their belief that they can use weapons to eradicate the will of the public.

Addressing the Syrian opposition, Davutoğlu stated, "You are not just a part of the groups that make up the Syrian opposition. You represent the structure of what the future will be based on. There surely will be different points of view among yourselves, this is totally normal, but the cause is one," he said. "The expectation of the Syrian people from you is to deliver a strong message of unity. Unify, unite your power and leave personal problems aside," stated Davutoğlu, whose words were responded to by the opposition with lengthy applause.

While in Egypt, Davutoğlu will be the first Foreign Affairs Minister to be welcomed by Egyptian President Muhammed Mursi. Davutoğlu will also be meeting with a number of politicians, including Hamdun Sabbahi and former Arab League Secretary General Amr Musa. In his meeting with Egypt's Foreign Affairs Minister Amr, Davutoğlu had the opportunity to discuss recent developments in Egypt and the Palestine issue.

A significant number of the Syrian opposition was in attendance at the conference in Cairo. According to opposition members, this two-day meeting was the most important thus far in terms of trying to rally the opposition together in an effort to establish a joint objective.