Öcalan says he is being betrayed by the BDP and PKK 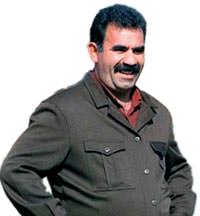 Leader of the PKK terrorist organization Öcalan has sent a hand-written letter to the Ministry of Justice in which he wrote, “Attorneys are warping my words and the BDP and the PKK are betraying me. I will no longer be in communication with them.”

As speculation has surfaced regarding whether or not the PKK leader is truly in İmralı, SABAH has acquired important details regarding Öcalan, who has been in isolation for the past 11 months. According to information obtained from high-level sources, it was Öcalan himself who initiated his isolation which has gone on for 11 months now.

Abdullah Öcalan penned the letter to the Ministry of Justice upon feeling he no longer had a voice following the Silvan attack which took place last year. The hand-written letter by Öcalan, which is being kept in the Ministry of Justice archives, writes, "Do not have me meet with these attorneys. They are warping and incorrectly conveying my words. My messages are not being delivered to the addresses intended. The BDP and the PKK are betraying me. I will no longer communicate with them." Thereby, it was the PKK leader himself that requested his own isolation.

'THE OSLO PROCESS NEEDS TO CONTINUE'

In his letter, Öcalan expressed the importance of the Oslo process and requested that the talks continue from where they left off, while also stating that he would be willing to speak with the committee that contacted him in the process and no one else. The PKK leader only spoke to his attorneys once following the Silvan attack, which took place on July 14th, 2011 and resulted in the deaths of 13 soldiers and has discontinued contact since. The last time Öcalan met with his attorneys was on July 27th, 2011, when he released the following announcement: I am very saddened by the deaths of PKK militants and 13 soldiers. It is the same fire that has burned both soldiers and guerrillas. If weapons are not silenced in their entirety and steps not taken, unfortunately conflict will be inevitable. The state officials I have spoken with prior, the committee, also came to speak with me on Saturday, July 16th following the Silvan attack."

Since then a development which confirms the letter's content is that Öcalan rejected a meeting with his own brother. Öcalan's brother Mehmet Öcalan paid a visit to İmralı, earlier this year on January 19th. Upon his return to Gemlik, Mehmet Öcalan told reporters that Öcalan had relayed a message to him stating, "Things are very sensitive here and it is not appropriate for us to hold a meeting."

Speaking with SABAH, a high-level official refuted any claims that Öcalan has ever left İmralı. An announcement made yesterday by the Bursa District Attorney, stated, "The convict is still serving his sentence at İmralı." It was MHP Chair Devlet Bahçeli, who ignited the debate of whether Öcalan was still at İmralı after 11 months of not meeting with his attorneys. Bahçeli had stated, "Is Öcalan in İmralı, or not? This question comes to mind after this extent of silence." Prime Minister Erdoğan responded by stating, "Let him go and see for himself." Later, allegations surfaced that Öcalan was staying in the National Intelligence Organization's Bursa District Headquarters Guest House. However, officials have very clearly refuted any such claims.