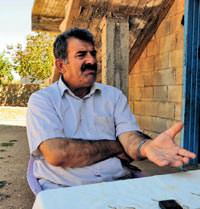 The latest negotiator in İmralı, the PKK leader’s younger brother Mehmet Öcalan tells SABAH: “Finding a democratic solution to the issue is to everyone’s benefit.”

"We are afflicted with the deaths. Whoever puts a stop to this, will be doing the best thing possible for this region. Mr. Prime Minister could solve this issue that is the truth. The person who puts an end to these deaths will be remembered forever," states Öcalan.

The Öcalan family has offered their support for the recent efforts exerted by Diyarbakır MP Leyla Zana. The last person to meet with Abdullah Öcalan, the leader of the PKK terrorist organization, was his youngest brother Mehmet Öcalan, who states, "Leyla Zana is valuable. She may have sacrificed herself, however she is very valuable for us. Everyone should be able to freely express their thoughts and everyone should be respectful of them."

Commenting on the recent meeting held between Leyla Zana and Prime Minister Tayyip Erdoğan, Mehmet Öcalan stated, "Mr. Prime Minister could solve this issue, that's the truth. Everyone feels this way. We are afflicted with the deaths of these people, of soldiers and guerillas. Whoever puts a stop to this, will be doing the best thing possible for this region. The person who puts an end to these deaths will be remembered forever".

Speaking to SABAH during this critical period, Mehmet Öcalan stated the following:

SUPPORT FOR ZANA: "Everyone should be able to freely express their thoughts. Everyone should also be respectful of these sentiments. I am of the opinion that Zana's approach does not differ greatly from that of the BDP. Everyone should be contributing to this and taking a step to put an end to the bloodshed. I see that Zana's statements are taken to the extreme. It is not right to redirect or take her words to the extreme. If you want the bloodshed to end, then you need to also contribute. I hope these deliberations result in positive results. Leyla Zana is valuable. She may have sacrificed herself, however she is extremely valuable to us. Then again, there is only so much Leyla can do. There needs to be a continuation, steps need to be taken."

THE ONE WHO SOLVES THIS ISSUE WILL BE REMEMBERED FOREVER: "Zana's words are out in the open. If the Prime Minister wants to he could solve this issue and that's the truth. The Prime Minister is also aware of this. If he chooses to he could truly solve this issue. Everyone believes this. This is Turkey's most significant issue. If this issue is resolved, it will be an extremely significant step in terms of unity and not in dividing this nation. Finding a democratic solution to the issue is to everyone's benefit. Everyone can see this. We are afflicted with the deaths of people, of soldiers and of what you call terrorists and we call guerillas."

COMMENTING ON THE REVOLUTIONARY PUBLIC WAR: "Duran Kalkan is the one who said this. We need to be realistic at the moment. Politically, Öcalan is the key aspect. If a door is opened there, then the other sides (the PKK) will also enter. However, there is the situation of isolation. Öcalan is not able to meet with anyone. I am now discussing the other side of things; this is an issue of humanity, of human rights. You are holding him and not allowing him to meet with anyone. If he isn't allowed to speak with others or with his attorney then at least let me talk with him."

"HE WANTED IT HIMSELF": "I went to İmralı and was the last person to meet with Abdullah Öcalan. It was maybe two months after his last meeting with his attorneys. He said to me, 'this issue will most likely be clarified in the days ahead. If the process is headed towards peace, that would be extremely good. However, they may put an end to this period. It may also be headed towards establishing peace. But then again they could stop the process, we will have to see.'

I went one more time after the last time I met with him, however the warden delivered a note to me which read, 'The situation is sensitive, let's not meet.' I asked the warden, 'Is this true, or are you not letting me see him.' They told me that this was his own request"