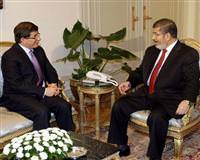 The meeting reportedly took place in Morsy's presidential palace in Heliopolis. Accompanying Davutoğlu was Turkish Ambassador to Egypt, Hussein Awny. During the meeting, Davutoğlu told Morsy that Turkey "is willing to work hand-in-hand with Egypt in all fields for the sake of having peace and stability prevail in the region."

During the past year, Davutoğlu has visited Egypt five times also meeting with former presidential candidate Ahmed Shafiq. The relationship between the Muslim Brotherhood (MB) and Turkey started only after the 2011 uprising when Turkey's Prime Minister Recep Tayyip Erdogan visited Cairo last September in a visit that Brotherhood members looked forward to.