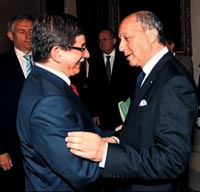 Speaking at a joint press conference following the meeting with Foreign Affairs Minister Davutoğlu, Fabius explained that they mainly discussed the situation in Syria, while also touching on the developments in Afghanistan and the Middle East, Turkey and EU relations as well as a number of both cultural and commercial topics.

Expressing his determination to advance Turkey's relations with the EU, Fabius stated, "In a region of instability, our ally Turkey is an indispensable actor and a factor of stability." Fabius also expressed that the two nations' have very similar perspectives on the Syrian issue.

Davutoğlu stated, "We are here to show the will to begin a new era. Turkish-French diplomatic relations are extremely significant from a historical global perspective. The meeting between the two foreign ministers was both extremely amicable and comprehensive. The current varying perspectives are clear. However, in order to eradicate these differences, we have decided to act with a joint vision and not based on concerns for internal politics."

When asked whether the veto obstructing five chapters in EU negotiations would be lifted or not, Fabius responded, "The new government is currently closely looking into the files. We want to solve the issue with good intentions."