Bashar al-Assad will pay for this 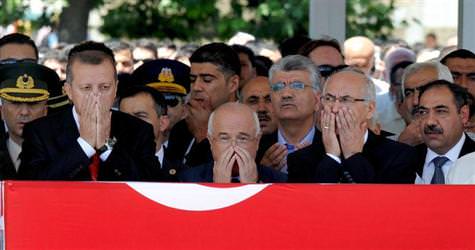 Funeral ceremonies were held yesterday in Malatya and Istanbul for the pilots killed in the F-4 jet downed by Syria on June 22nd. Prime Minister Erdoğan as well as a number of high-level state and military members offered their condolences to the families of the soldiers killed, while addresses made at a commemorative ceremony for the pilots brought everyone to tears.

Prime Minister Recep Tayyip Erdoğan shook hands with each member of the soldiers' families and offered his condolences. Speaking at the ceremony, 7th Main Airbase Commander Rear Admiral Mustafa Avcı stated, "We are all here today in order to lay to rest two heroes who were killed in an atrocious attack while unarmed and during a reconnaissance flight."

Directorate of Religious Affairs Vice Chairman Hasan Kamil Yılmaz stated, "Our beloved martyrs were heroes who willingly gave their blood to serve this country, nation and flag." Yılmaz went on to hold a prayer for the soldiers and offered his condolences to their families.

Lieutenant Gökhan Ertan's father kissed both coffins, while the soldiers' families and close ones hugged the coffins in tears for any form of final embrace with the martyred pilots. Following the commemorative ceremony held at the Malatya airbase, a funeral prayer was held for Captain Ertan at the Kabristan Mosque in Malatya after which the pilot was buried at the Malatya Garrison Military Cemetery.

Prime Minister Erdoğan, joined by other high-level members of the military and state also attended a funeral prayer ceremony held in Istanbul for Lieutenant Hasan Hüseyin Aksoy, who was laid to rest at the Edirnekapi Military Ceremony. After the ceremony, Prime Minister Erdoğan and the father of Lieutenant Aksoy, Ali Osman Aksoy, held hands and walked together. The late lieutenant's ten-month pregnant wife Banu Aksoy, who was supported by her husband's family during the ceremony, was unable to hold back her tears.