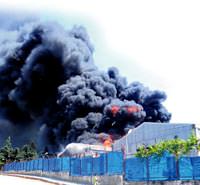 A newlywed couple was killed and eight wounded in a fire which broke out in a Syrian refugee camp in Hatay's Yayladağı district.

A fire which broke out in a 'tent city' refugee camp which houses Syrians seeking refuge from the internal strife in Syria killed one married couple and injured eight other refugees.

The Yayladağı refugee camp consists of several two-story concrete buildings in what was once the Tekel state tobacco factory. Yayladağı is located only a couple of kilometers from the Syrian border and the camp is just one of many set up in Turkey to harbor the influx of Syrian refugees escaping their own nation due to the violent crackdown of the Assad administration.

The fire erupted at approximately 14:30 on Friday and resulted in creating immense panic amongst the Syrian refugees housed in approximately 200 tents at the camp. While some of the refugees attempted to escape the fencing, police and other officials at the camp tried to contain the fire.

Preventative measures were taken immediately to ensure the fire did not spread to other storage units and container buildings in the camp where 2,600 Syrians are staying. A number of refugees moved gas bottles away from the area on fire. Meanwhile, periodic explosions were heard.

A newlywed couple, Muhammed Ukle (27) and his wife Sabrin Abdullah (23) were killed in the fire. They had just arrived to the camp a few days prior. Eight other Syrians were injured. The injured were taken by ambulance to the Yayladağı State Hospital.

New alternatives are being researched in order to house the Syrian refugees affected by the fire. Hatay Governor Mehmet Celalettin Lekesiz announced that an electrical short-circuit caused the fire to erupt. Lekesiz also stated that the refugees who were being housed in the container buildings that were damaged by the fire will be moved to another refugee camp set up in a former TEKEL facility in Altınözü.