‘I entrust Bosnia to you’ 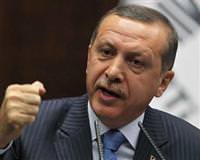 Prime Minister Recep Tayyip Erdoğan spoke at an AK Party Provincial Deputy Meeting when he honored the memory of the lives lost in Srebrenica.

"Today is the anniversary of one of the most tragic events to take place in recent history. On July 11th, 1995 over 10,000 innocent people were inhumanely massacred in Srebrenica. This massacre transpired in the center of Europe. Even though they were well aware of what was transpiring, Europe just sat and watched. Those who did remain spectators will have a stain that will not be erased for hundreds of years.

This same stain remains on those who today simply watch as Syria commits a massacre. The curse on these innocent people will be lifted sooner or later and those responsible will be held accountable in front of humanity. I offer my condolences to our brothers who were massacred in Bosnia-Herzegovina. I offer my condolences to Bosnia-Herzegovina's legendary hero Aliya Izzetbegovic. I visited him just hours before he passed and he whispered in my ear, 'I entrust Bosnia to you.' Yes, Bosnia and our Bosnian brothers have been entrusted to us. I want to remind that we will continue to contribute in every way possible in order to ensure peace and welfare."

WE WILL CONTINUE TO STAND BESIDE EGYPT

After the public uprising, our sibling nation Egypt continues on the difficult path to democratization. I want to congratulate Muhammed Mursi and offer him my wishes for his success. Even though this period may be difficult I believe they will surpass it. Ever since the start of the revolution, Egypt has come a long way. Egypt will see the beautiful days it deserves. We have learned this from democracy, the rules are set and once you take off on that path you cannot make up new rules. To make new rules would be disrespectful to the will of the Egyptian public. For the Military Council to disregard the parliament is disrespectful to the public's volition. As Turkey, we will continue to stand by Egypt at every stage needed."