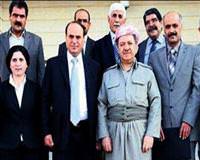 With Bashar al-Assad’s refusal to fulfill his promises, Iraq’s Regional Kurdish Administration leader Barzani is now bringing together Syria’s disjointed Kurds to Erbil from where they will act as a single voice against the Assad regime.

The internal strife in Syria has resulted in opening the door to a new era involving the future of the Kurds. The 'Kurdish card' used by Syrian State Leader Bashar al-Assad has now been taken over by the Regional Kurdish Administration Leader Massoud Barzani. Barzani has gathered all of the Kurds in Syria to Erbil, where he will form a 'High Kurdish Council' and where they will act as a 'single voice' against the Assad regime.


A 'SINGLE VOICE' AGAINST ASSAD

While the war between the Syrian administration and its opponents persists, Barzani has managed to reconcile the various congregations of Kurds in Syria. Even though the PKK's Syrian wing PYD is resistant towards being included in the 'Kurdish National Council' umbrella, the Kurdish groups within the wing have decided to act together. After a series of meetings that went on for four days under Barzani's chairmanship in Northern Iraq, a final decision was reached to act unified.

Due to being forced to employ all of his troops against the opposition, Assad has had to surrender a portion of the area along the Turkish border to the Kurds. In certain regions where the Syrian military presence is no longer, the PKK's Syrian wing, the PYD has taken over. Meanwhile, there has been serious conflict between the PYD and its affiliate Kurdish groups and the Syrian Kurdish National Council with lives lost on both sides.

Bashar al-Assad promised the nearly two million Kurdish population the rights to identification, owning businesses, education in their native language and the right to work. The fact that Assad has not fulfilled his promises has resulted in increasing tension amongst Kurdish groups which has instigated the Syrian Kurdish National Assembly to seek aid from Barzani. Upon which, Barzani met with Council representatives in Erbil as well as PYD Chair Salih Müslüm. Just last week, Barzani told both groups to stay in Erbil until a solution is reached enabling them to act unified. Barzani insists that should a solution not be reached, the Kurdish public may be stripped of their rights. Upon the Kurdish leader's insistence the PYD remain distant from Syria's opposition groups, the PYD then accepted the offer to act within the umbrella of the Council.

Expressing how pleased he was with the consensus reached, Barzani stated, "I want to thank all of the sides that have reached a consensus. We need to have a joint stance against all of the changes and developments that transpire in Syria. Be adamant when it comes to the legitimate rights belonging to the Kurdish people. This is possible with unity and solidarity." Since the very start of the conflict in Syria, Barzani has advised the Kurdish population to not join in demonstrations.

COMPROMISE REACHED ON FIVE MAIN ISSUES
A mechanism will be put into place in order to realize the Erbil Agreement.
A joint council will be established for political and strategic issues. This 'High Kurdish Council' will be geared towards ensuring the Kurds in the region act together.
A single voice will be established against the Assad regime. Three committees will be set up in order to track the efforts made.
Any sort of tension that creates an environment of conflict between Kurds will be avoided.
A commission will be formed two weeks following the signing of the agreement.