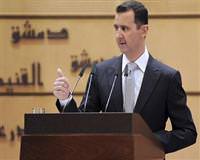 Calling the most recent slew of killings in Syria the sound of footsteps of a regime on its way out, Prime Minister Erdoğan stated "Sooner or later the Syrian public will hold these bloody tyrants accountable.”

Prime Minister Recep Tayyip Erdoğan was speaking at an AK Party District Congress in Kocaeli where he referred to Syrian leader Bashar al-Assad as a'puppet dictator' during a delivery of a series of messages directed towards Syria.

MASS EXECUTION IN HAMA: "Unfortunately, once again we have received painful news from Syria. Ravenous murderers from the Assad regime recently staged an attack on Hama's Tremsah district using heavy weapons. According to the information obtained, almost 270 innocent people, most of which were women and children, were killed. We are now hearing that our Syrian brothers from Hama were killed in mass executions in mosques, with their necks sliced.

THERE ARE NO MORE WORDS: There are no more words left for Syria. These cruel massacres and attempts at genocide, this inhumane brutality, is nothing else than the sound of the footsteps of a regime on its way out. We saw the same thing with the Saddam regime in Iraq. We saw it with Gaddafi's regime in Libya and with the Mubarak regime in Egypt. Those who direct their weapons onto the public and for their own ambitions, to keep their position, their success and for their future are only preparing for their own end.

DICTATORS ARE COWARDS: All dictators are cowards. All dictators are tyrants. Dictators do not fear their own nation's enemies they are afraid of their own public. For decades now, this autocrat regime in Syria has not shot a single bullet to combat land under occupation. This dictatorial regime in Syria has not been able to show the courage to shoot a single bullet at armed military vehicles in their own air field, land and territorial waters. They are only and could only be able to attack an unarmed plane in international waters.

THE PUBLIC WILL HOLD YOU ACCOUNTABLE: Sooner or later, these bloody tyrants will go and the Syrian public will hold them accountable.

BABY ASSAD: In 1982, there was an extremely devastating massacre in Syria's city of Hama in which over 40,000 citizens were slain. This massacre, which has become a stain on humanity, was orchestrated by Assad's father. Now his son seems to be on the same path. The world did not speak out against what happened on that day. Unfortunately on that day, those who raise their voice about universal human rights and European values did not make a sound.

THIS IS NO LONGER THE OLD TURKEY: Today there is no longer a deaf and mute Turkey which turns their backs on their brothers and neighbors in the region. There is now a Turkey under the AK Party's leadership which continues to stand by their Syrian brothers who are struggling for democracy and liberty against this puppet dictatorship regime."

During his address, Erdoğan emphasized that Turkey would continue to receive those Syrians who have had to leave their homes, land and relatives with open arms and also mentioned that there are currently over 40,000 Syrians seeking shelter in Turkey.