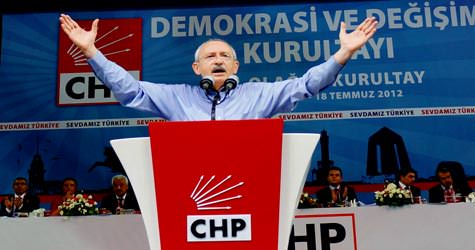 Kemal Kılıçdaroğlu was re-elected yesterday for a second term as CHP General Chairman in an unopposed election which passed peacefully. In a speech laden with vows of change, the CHP leader stated, “Status quoists are against change. They exert efforts to further the status quo. However, we are determined to follow our own path.”

During the CHP's 44th ordinary congress on Tuesday, Kılıçdaroğlu was re-elected as the sole candidate for the post a second time since 2010, with 1,164 votes out of the 1,232 delegates present. This was the second time the CHP chairman has run unopposed and been elected, the first being in the 2010 party congress. Kılıçdaroğlu took the pulpit for an hour and 15 minutes to address the congress, which surprisingly took place without conflict.

The following are a number of excerpts from Kemal Kılıçdaroğlu's address in which the CHP leader vowed for change:

ANTI-IMPERIALIST STANCE: CHP will not deviate for even a millimeter from its support of complete independence and its anti-imperialist stance.

CHANGE, CHANGE, CHANGE: Social democracy is based on change, change, change. Because of the revolutionary spirit in CHP's roots, we will always support change and any environment of transformation. Status quoists are against change. Sometimes they strive for the continuation of their status quo in an effort to maintain stability. However, we have set out for the benefit of our public and our nation and are determined to continue on this path.

THERE IS A STANDING FUNERAL: Call it the Kurdish issue call it an East or a Southeast issue, call it terrorism, whatever you call it the fact is there has been a standing funeral for 30-35 years now. This needs to be laid to rest. However, no one seems to dare. The CHP is determined to solve this issue.

In his thank you speech following the election, Kılıçdaroğlu summarily stated: "We have set out on a path for a nation of peace, harmony and honor. We will continue on that path." The CHP Chair went on to thank everyone for their help during this period.

President Abdullah Gül and Prime Minister Tayyip Erdoğan both offered their congratulations to Kılıçdaroğlu for his re-election.

A total 1,135 journalists from the national and foreign press were accredited to witness CHP's 34th General Assembly on Tuesday. There were also approximately 700 security members present to maintain order in the assembly.