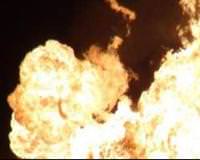 A blast on a BOTAŞ pipeline in Mardin's Midyat district resulted in igniting a major fire.

The PKK terrorist organization has staged an explosion in an attempt to sabotage a BOTAŞ pipeline in in the southeastern province of Mardin's Midyat district that is part of the greater Kirkuk-Yumurtalık oil pipeline. A fire erupted following the blast, which firefighters immediately began extinguishing. Their attempt to put out the fire was challenged by the suspicion the PKK may have set up mines in the vicinity and therefore firefighters were forced to extinguish the fire in a controlled and safe manner. The area was blocked off and no one else was allowed to enter the site of the blast and subsequent fire.

PKK terrorists staged the sabotage attack at around eleven pm on Friday evening in an area of the pipeline near Midyat's Şenköy. A fire erupted once the explosives were detonated on the pipeline after which security forces, firefighters and BOTAŞ teams immediately arrived on the scene.

While intensive security measures were put in place in the vicinity the flow to the pipeline was halted. Security forces proceeded to extinguish the fire with tight control measures in place, due to the possibility the PKK may have set up mines in the area. No one was killed in the explosion and an investigation of the incident has been initiated.