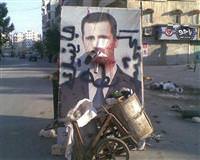 Syria’s future and the risk perception for Turkey were two topics recently laid on the table in Ankara. Recent analysis by security and intelligence departments emphasizes that Turkey will not remain indifferent to the PKK’s attempts to settle along the border.

During this time in which the post-Assad transitional government model is being debated and the 'West Kurdistan' scenario has surfaced to the agenda, Ankara has laid to the table two main concerns: 'Syria's future and risk perception for Turkey'.

The conclusion reached was that Assad is using the Kurdish card and the PKK terrorist organization wants to benefit from the conjuncture.

The following are a series of assessments from recent analysis by security and intelligence units on 'the activities of Kurdish groups in Northern Syria, the relationship between the Kurds and the armed opposition groups in Syria, the regional autonomous expectations, the PKK's activities and the developments in the camps in Turkey':

Assad emptied out Northern Syria by arming Kurdish groups. Those circles that used to spread propaganda that the Assad regime was there to stay are now spreading the claim "if Assad goes Syria will become divided".

A group from the PKK terrorist organization has temporarily taken over control of three small towns in northern Iraq. However, the opposition says they will be sent out of the region. Turkey will not remain unresponsive to the PKK settling along the border. Due to the chaos in Syria there can be provocative incidents such as flag raising.

Turkey's priorities are Syria's territorial integrity and securing a controlled non-Assad transitional period.
Members of the PKK terrorist organization and Syria's intelligence agency Al Mukhabarat were detected as being behind a number of incidents that transpired recently at camps where Syrians are seeking refuge and preventative measures were taken.

Intentional forest fires were set off in Turkey. This was an attempt to halt mass emigrations which were posing difficulties for the regime.

There is also the issue of information being received that weapons of mass destruction were used in operations in Damascus and its surroundings. The international community needs to exert pressure on Assad to not use weapons of mass destruction. Assad should not be allowed to establish a Latakia-based Nusayri state or intend to stage any sort of inane attacks on neighboring nations on his way out.