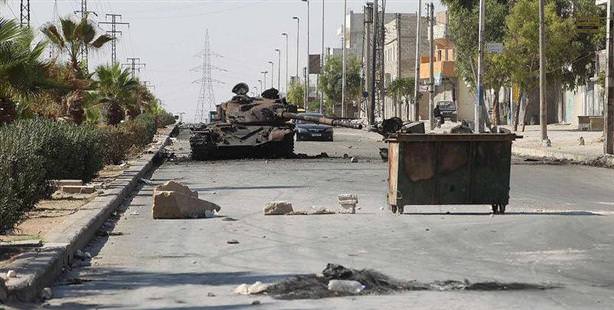 Military helicopters pounded a rebel-held district of Aleppo on Saturday and armoured units positioned themselves for an onslaught that could determine the fate of Syria's biggest city, opposition sources said.

Turkey, once a friend but now a fierce critic of the Syrian government, joined growing diplomatic pressure on President Bashar al-Assad, calling for international steps to deal with the military build-up.

"Assad's forces are likely to achieve a tactical victory that will represent a setback to opposition forces and allows the regime to demonstrate its military dominance," said analyst Ayham Kamel of the Eurasia Group, adding however that the rebels were getting stronger while the military was on the wane.

Three rebel fighters were killed in clashes between midnight and dawn on Saturday in Aleppo, the Observatory said. It said 160 people were reported killed in Syria on Friday, adding to an overall death toll of around 18,000 since the uprising began.

Video footage provided by the Observatory showed smoke rising over apartment blocks in the city into a hazy sky on Saturday. The sound of sporadic gunfire could be clearly heard.

While attention has focused on Aleppo, fighting was also reported in towns across Syria: Deraaa, the cradle of the revolution, Homs, the scene of some of the bloodiest combat, and Hama, where a revolt against Assad's father in the early 1980s was suppressed with thousands of deaths.

At least 10 people were killed on Saturday when Syrian security forces went into Maadameyat al-Sham near Damascus, the observatory said.

According to Memun Gizzi, a commander of the Free Syrian Army, over 100 tanks have deployed for Hama, Damascus and Aleppo. The conflict is expected to continue and over 1,000 members of the opposition from out of town are now heading to Aleppo to assist the Free Syrian Army.

Turkish Prime Minister Tayyip Erdoğan said late on Friday that international institutions needed to work together to address the military assault on Aleppo and Assad's threat to use chemical weapons against external enemies.

"There is a build-up in Aleppo, and the recent statements with respect to the use of weapons of mass destruction are actions that we cannot remain an observer or spectator to," he said at a news conference in London with British Prime Minister David Cameron.

"Steps need to be taken jointly within the United Nations Security Council, the Organisation of Islamic Countries, the Arab League, and we must work together to try to overcome the situation," he said.

Earlier, Erdoğan had cheered on the rebels.

"In Aleppo itself the regime is preparing for an attack with its tanks and helicopters ... My hope is that they'll get the necessary answer from the real sons of Syria," he told Turkish TV.

Cameron said Britain and Turkey were concerned that Assad's government was about to carry out some "some truly appalling acts around and in the city of Aleppo".

Russian said that international support for Syrian rebels would lead to "more blood" and the government could not be expected to willingly give in to its opponents.

U.N. rights chief Navi Pillay urged both Syrian government forces and rebels on Friday to spare civilians in Aleppo, voicing deep concern at the "likelihood of an imminent major confrontation" in the city reminiscent of other deadly assaults.

United Nations Secretary-General Ban Ki-moon said he was deeply concerned about reports that Syria could use chemical weapons and demanded that the government should state it would not use them "under any circumstances".

But the White House said such a promise from the Syrian president was "certainly not enough" given Assad had paid only lip service to a U.N.-backed peace plan.

"Assad's word is not worth very much," White House spokesman Jay Carney said. "Any use of those weapons, any failure to safeguard those stockpiles would be a very serious transgression that would result in those responsible being held accountable."

In stating this week that it would not use chemical weapons against its own people, but might do so against external threats, Syria caused major international concern about its stockpiles of non-conventional weapons.

The increase in fighting in Aleppo follows a bomb attack on July 18 that killed Assad's defence minister and three other top officials in Damascus, a development that led some analysts to speculate that the government's grip was slipping.

Since then, Assad's forces have mounted a strong counter-attack against rebels in Damasacus as well as concentrating forces for an expected assault on Aleppo.