SABAH Correspondent in Aleppo says the city has been demolished 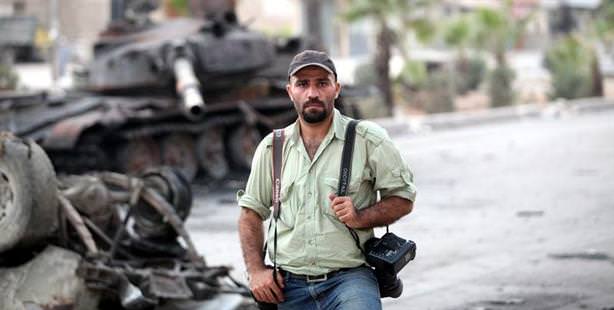 SABAH Correspondent Emin Özmen crossed into the Syrian border, managing to bypass an area laden with mines with the aid of local Türkmen. Later, he made his way to the city of Aleppo, where the violent conflict has reached a peak. Areas already demolished by Assad’s military were continuously bombed into the morning hours.

SABAH has managed to go where not many from the international press have been able to access. Reaching Aleppo, which is actually just 45 minutes by highway from the Turkish border, Sabah correspondent Emin Özmen experienced first-hand the intense violence as members of the Free Syrian Army try to fend off Assad's remaining military forces. The streets, says Özmen were filled with destroyed tanks.

The Free Syrian Army has control of a majority of the city of Aleppo, where the conflict has escalated over the past ten days. Troops tied to Assad have encircled the city with tanks. After a dangerous trip to Aleppo, Emin Özmen shares with us his experiences, both in writing and photographs.

'I CROSSED THROUGH LANDMINES'

"In order to witness the conflict as it unfolds, I set off for Hatay on Thursday. My plan was to cross over the border through connections in nearby Yayladağı and then head for Aleppo. However, when I realized it would be impossible to cross through Yayladağı, I had to redirect for Kilis instead. Due to all border crossings with Syria being closed, I ended up entering Syria with the help of a few villagers by crossing through an area laden with fencing and landmines. After a short but dangerous trip, I reached an area overseen by a Türkmen group, which had set up tents and were controlling entrances and exits. After waiting a few hours and with the Türkmen group's assistance I reached Rial, a Türkmen village near the border.

THEY GO INTO COMBAT HAVING RESTED

The Türkmen are continuing to live their lives in villages located along the Turkish-Syrian border. In Rial, we discussed how the Türkmen have been left alone to fend for themselves as well as the recent tension with the PKK, all the while hearing the sounds of bombs exploding over Aleppo. The Türkmen, which make up three million of Syria's population, explain that the region has been left entirely to the devices of the PKK and therefore for a long time now they have been trying to acquire arms and establish an organized militant system. With funds collected amongst themselves, the Türkmen have managed to obtain approximately 500 weapons and define themselves as being a part of the Free Syrian Army.

The Türkmen have established two squads they have named after the Ottoman Sultans, Sultan II. Abdülhamid and Fatih Sultan Mehmet. Newly joining opposition soldiers are trained in these squads. General Abulrezzak Laz, who deserted the Syrian military two months ago, is in charge of commanding the squads. They have taken over control of four neighborhoods in Aleppo and therefore they are in the center of the conflict every day. When opposition forces need to rest, they return to Rial where reinforcement troops are sent out in their place with replacement ammunition.

In the early morning hours, we set off with a new group of soldiers who will be replacing the returning Free Syrian Army troops. We headed out in a convoy for the 50 kilometer-long trip to Aleppo. The soldiers were sad due to having received news that four of their soldiers were killed in conflict the night prior, their consolation being the satisfaction of having rendered six tanks ineffective. After a two-hour journey through byroads we passed through a control point set up by the Free Syrian Army and reached Aleppo. Where we were was an area under the Free Syrian Army's control. The streets, with the exception of soldiers placed at control points, was completely empty. Barricades were set up every 200 meters.

BOMBING THROUGH THE NIGHT

On the streets we see the wreckage of burnt tanks and buses. A number of opposition forces were positioned in an elementary school, where some were refilling their cartridges, others, after fighting all day, were trying to recover from their exhaustion. On their faces one could see belief and great confidence. Opposition forces claim that after ten days of continuous violent conflict, they have now taken over 60 percent of control of Aleppo. They also say that with the support of the public, the Free Syrian Army has now gained complete control over İnzarat, Haydariye, Mesekin Hanano, Sakkur, Şeyh Kudur, Şeyh Faris, Hulluk, Silemen Halebi, Arkup, Şaar, Babyolu, Miyesser, Mercey, Jezmeti and Salih. Intense conflict continues however in Salahaddin, Sukkari, Beb Elhadid and Hamdeniye. As I write my impressions of what I have seen at two a.m. in the morning, I can hear the noise of the ongoing combat from two kilometers' distance. With warplanes and cannons, forces loyal to Assad continue to keep Aleppo under fire.

The following is a translation of an article originally written by Emin Özmen.