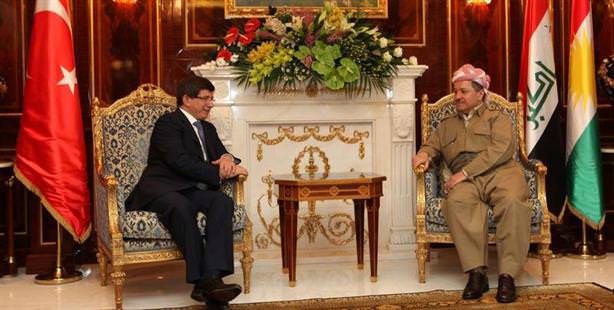 The following, are the four messages Davutoglu will be delivering to Barzani in Erbil:

WE ARE NOT AGAINST KURDISH UNITY: We are not at all against the unity of Syrian Kurds nor of their determining their own future. We are against the opportunist actions of the PYD (a PKK affiliate). If the Syrian public were to reach a different decision for Syrian Kurds then we would respect it. The PYD is using the fact that Assad is losing control. This is not a development accepted by the Syrian public. If you recognize the PYD, then for us, that would be the end of it.

BE CAREFUL WITH THE KANDIL-QAMISHLI LINE: Those raising Öcalan's flag in Syria are PKK members who came from Kandil. During this time period, securing Kandil is extremely important. We must continue to work together against the PKK.

DO NOT TRUST THE PYD: The PYD first collaborated with Assad and has since changed directions. On July 12 during a Kurdish conference held in Erbil, they acted differently towards you. The Syrian National Council is also uncomfortable with the PYD.

SUPPORT THE SYRIAN NATIONAL COUNCIL: The division of the opposition works to benefit Assad, and results in further deaths. Instead of Kurdish groups gathering in separate structures, you should promote their joining the Syrian National Council.

DAVUTOĞLU BRIEFS ERDOĞAN
Prime Minister Erdoğan met with Davutoğlu for a one on one meeting in the late evening hours last night. During the one-hour meeting, Davutoğlu relayed to Erdoğan the messages he intends to deliver to Barzani during his trip to Iraq.