A strike from MİT on the PKK 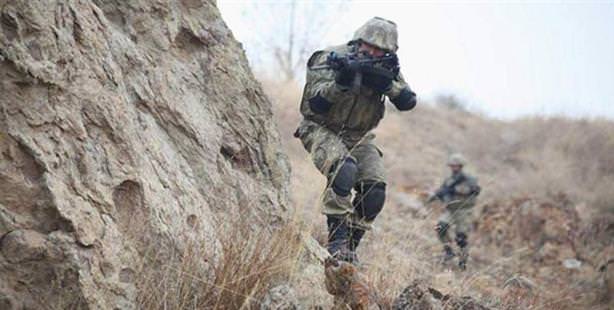 It turns out Turkey’s National Intelligence Organization, or MİT were the ones to bring down the PKK's plans to stage a major attack and civil uprising in Şemdinli.

Turkey's National Intelligence Organization (MİT) has thwarted attempts by the PKK terrorist organization to create a 'liberated zone' along the Şırnak-Hakkâri line and centered in Şemdinli. A series of effective operations by MİT put an end to the terrorist organization's intentions to create an environment of conflict with security forces by staging attacks with groups of 250 terrorists in rural areas while simultaneously igniting a 'civil uprising' against security forces in the city. It was MİT's immediate and effective intelligence acquisition that resulted in unraveling the plan before it could be realized. The moment the terrorists, who were being closely followed, intended to put the plan in action, security forces staged a fast and effective operation which resulted in vaporizing the PKK's plans.

According to the information obtained, the PKK developed a strategy to establish a 'liberated zone' almost a year ago. The winter months were spent planning and the spring and summer seasons were when the terrorist organization was going to take action. The plan, organized by the PKK"s Syrian-native leader Fehman Hüseyin, was going to transpire in three stages: "Infiltration, sabotage and attacks."

The first stage involved the terrorists conducting exploratory studies in order to determine the locations for infiltration. Areas of higher elevation in Şemdinli such as the Samanlı Base region, Şapatan and Haruna, as well as rural regions; Günyazı, Kayalar, Çatalca and Altınsu were determined as locations for infiltration and hideouts. According to the plan, plain clothed terrorists would stage attacks on rural areas and ignite uprisings in the city. The second stage involved the terrorists grouped in rural regions staging a collective attack. The third stage would have civilian-clothed terrorists who had infiltrated amongst the public, staging a simultaneous attack on military units. When the military returned with fire, propaganda would be staged inferring that 'civilians are being hit' which would lead the way to a public uprising. With images of street fighting, this would result in creating the perception of similarity between what is actually transpiring in Syria.

Prime Minister Recep Tayyip Erdogan was briefed on the operations during the July 25th security summit. It was determined that with this plan, the organization was trying to revive the 1992 concept, forcing the government to respond with weapons. During the meeting, it was also discussed that the organization is trying to buy more time for a cornered Bashar Assad.