Joint action in the fight against terrorism 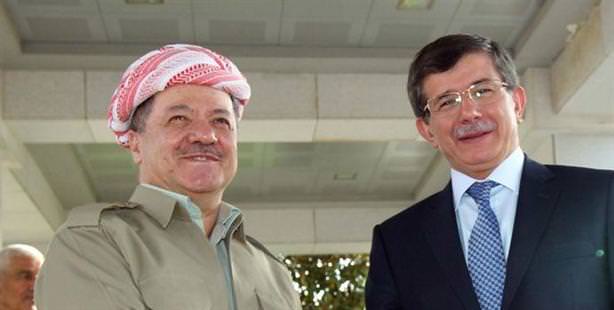 After a three and a half hour meeting with Northern Iraq Regional Administration leader Barzani, Foreign Affairs Minister Davutoğlu stated, "We openly shared our concerns. Our meeting was positive. The regional administration has received our message.”

Turkey and the Northern Iraq Administration reached a consensus on ensuring that terrorism does not transpire in northern Syria and released an announcement stating "terrorism is a joint threat". After a three and a half hour meeting with Barzani, which Davutoğlu expressed went positively, Turkey's Foreign Affairs Minister extended his trip in Erbil in order to attend a fast-breaking meal and prayer ceremony for Ramadan with the Kurdish Autonomous Regional Leader.

During the critical meeting, the decision was reached to continue the growth of relations with Northern Iraq and a joint message was delivered regarding Syria. The four main messages delivered in the joint announcement were as follows:

ASSAD INCITES STRIFE: The actions and policies exerted by the Syrian regime are inciting sectarian and ethnic strife.

TRANSITIONAL PERIOD: Syria needs to experience a peaceful transition. The Syrian public must be the ones to decide on Syria's future.

SUPPORT FOR EQUALITY: The establishment of a democratic, free and pluralist Syria must be supported. All ethnic or sectarian groups in Syria will be respected and their rights ensured and protected.

VIOLENT GROUPS OR ORGANIZATIONS TO BE CONSIDERED A THREAT: All violent groups and organizations that try to exploit the lapse in power in Syria will be considered a threat. There will be no terrorist or extremist groups in the new Syria.

During the meeting, Davutoğlu relayed to Barzani Turkey's concerns with what is transpiring in the northern part of Syria and that they will not remain spectators to the developments there.

Speaking to the press, Davutoğlu stated "We clearly expressed Turkey's expectations to the Barzani administration. We also discussed the issue of terrorism, especially in Syria, with the regional administration. Turkey's expectations are very clear. We shared our visions and concerns regarding the region. We have a unified understanding regarding the steps we will take together. We also shared our concerns for the future. The regional administration heeded our message."