Davutoğlu pays a visit to Kirkuk 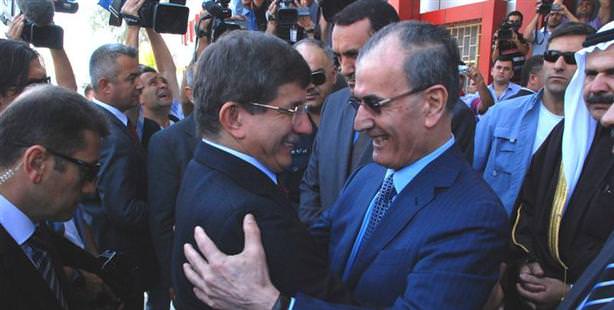 After holding a meeting with Barzani in Erbil, Foreign Affairs Minister Davutoğlu paid a surprising visit to Kirkuk yesterday. During his stay in the Türkmen city Davutoğlu relayed the message, “We will always be at your service.”

Ahmet Davutoğlu has officially become the first Foreign Affairs Minister to visit the Turkmen city of Kirkuk in 75 years. After sharing a meal to break the fast for Ramadan with the leader of the Autonomous Kurdish Region in Iran Massoud Barzani, Davutoğlu moved on to Kirkuk. Visiting Kirkuk has been a dream of the Foreign Minister's ever since he took office on May 1, 2009. Yesterday, Davutoğlu realized the long awaited dream and had the opportunity to meet with Kirkuk Governor Necmettin Kerim, State Assembly Spokesman Hasan Turan and Iraqi Turkmen Front Chairman Erşat Salihi to which he relayed the message that Turkey will always be at their service. Later in the day, Davutoglu returned to Erbil where he met with Syrian Kurdish group representatives.

Arriving to Kirkuk, which is 83 kilometers south of Erbil, in the morning hours and under intense security measures, Davutoğlu was greeted by crowds shouting Kirkuk is Turkish and will remain Turks," to which he responded, "This is one of the happiest days of my life. This is the day we have finally made it to Kirkuk, a place we have always dreamed of being with you in." Reading an excerpt from a poem devoted to Kirkuk, Davutoğlu stated, "For us, Kirkuk is just as important as poetry is for someone in love."

Reminding that for centuries Kirkuk has been the home to Turkmen, Arabs and Kurds, Davutoğlu said, "There may be some that want to instigate trouble here. However, we will respond by acting with these sentiments of brotherhood. The Turkmen factor is the most significant element of this city of peace. This element will never dissipate." Emphasizing the importance of Kirkuk for Turkey, Davutoğlu stated, "If you were to even have a splinter, it would be felt by 75 million Turks in Anatolia. I said I could just decide to come one night, and we did. With a momentary decision, we have arrived this morning. Hopefully we will come more. Hopefully we will be together more."

Speaking to reporters in Turkish, Kurdish and Arabic after a meeting with Kirkuk Governor Necmettin Kerim, Davutoğlu said that Kirkuk represented to spirit of the Middle East and went on to state the following: "In Kirkuk, Turkmens, Kurds and Arabs have lived together for centuries and will continue to live in peace forever. And we will also live together in peace with our Sunni, Shiite, Arab, Kurdish, Turkmen or Christian brothers regardless of their sect. Turkey is ready to offer all it can for Iraq's and Kirkuk's development. We are always at your service."

After Davutoğlu's trip to Kirkuk, marking the first time a Turkish Foreign Minister had visited in 75 years, the last time being a visit paid by Tevfik Rüştü Aras in 1937, he met with officials from the Syrian National Council and the Syrian Kurds National Assembly. Davutoğlu returned to Ankara yesterday evening where he met with Prime Minister Erdoğan.

The Iraqi Foreign Ministry released a statement criticizing the fact that they had no knowledge of Davutoğlu's trip to Kirkuk, which had been kept under wraps for security reasons. The statement released yesterday read, "It is not in the interest of Turkey or any other party to underestimate national sovereignty or violate the rules of international relations and not comply with the most basic regulations in the relations of states and officials," the Foreign Ministry added. "All of that was done without the knowledge or approval of the foreign ministry and without going to the official and diplomatic channels to organise this visit."