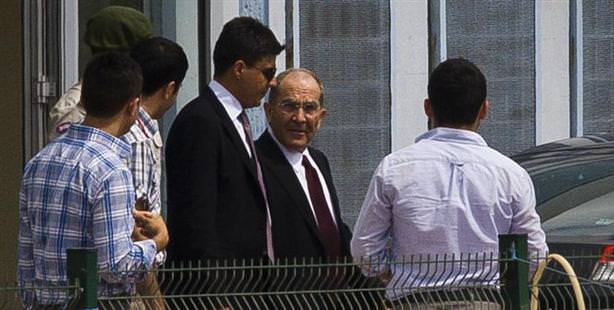 Testifying in the Ergenekon case, former Chief of General Staff Hilmi Özkök expressed that the issue of planning a coup was brought to the table when the AK Party came to power, however nothing was made official and no action was taken.

Former Chief of General Staff Hilmi Özkök testified in the Ergenekon case on Thursday at Istanbul's 13th High Criminal Court in which he stated that discussion of issuing a military memorandum did take place following the AK Party coming into power in 2002. Also in the court for yesterday's hearing were 47 suspects in the Ergenekon case, including detained CHP deputy Mustafa Balbay, Tuncay Özkan, Full General Hasan Iğsız and retired Brigadier General Veli Küçük.

The testimony from General Hilmi Ozkok, called as a witness in the trial of nearly 300 defendants accused of seeking to overthrow the AK Party's government, shed new light on military thinking at the time of the alleged plots.

Özkök was head of NATO's second largest armed forces between 2002 and 2006, the first four years that Erdogan's AK Party was in power. Özkök is the third former general staff chief to testify in trials of alleged secularist conspiracies against the government in power. Wearing a dark suit and glasses, Özkök calmly addressed the courtroom in Silivri, west of Istanbul, where many defendants in the coup plot cases are held in an adjoining high security jail.

"When the party in power was elected there was unease among members of the Turkish Armed Forces, including me," he said. At Thursday's hearing, prosecutors asked Özkök if generals had discussed issuing a "memorandum" warning to the government during his time in office. "Sometimes we would hold brainstorming meetings. People there would say what's on their minds ... Yes that word was mentioned there, but not as an actual proposal," he said.

WHAT THE CHIEF SAYS GOES

Özkök began his testimony by stating, "I was appointed as Chief of General Staff in 2002. One year later, an election was held and the current party in power was elected. During the February 28th era, there was a sense of unease amongst everyone, including myself. Looking back to what certain members of this party have said in the past resulted in creating doubt as to whether they would make concessions on the achievements of the Republic or if there would ever be an environment in which the nation's integrity or independence could be harmed and would there be a way to rectify the situation. We held meetings on the issue. In the military everyone freely expresses their opinions. In the end it is what the commander says that matters. This is what we did. From time to time, my opinions differed from that of my subordinates. This is something I find to be normal."

Özkök said that during a 2003 seminar at which participants allegedly drafted a coup plot targeting the AK Party government "went beyond its aim." "The seminar went beyond its intended purpose and I warned my officers about it," the ex-military chief told the court. He was referring to a controversial meeting which was held at the General Staff's Selimiye barracks in March 2003. Özkök told judges that he did not attend the seminar due to his busy schedule.