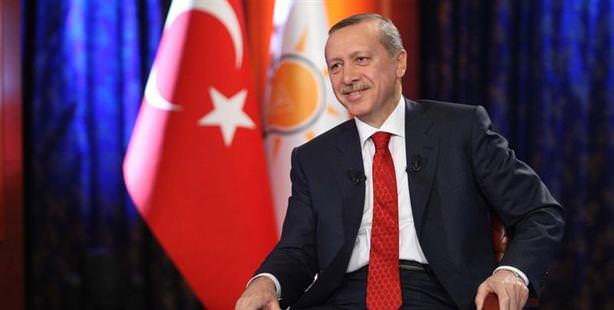 Erdoğan, commenting on the recent tragic terrorist attack in Hakkari, stated: “That we have lost eight martyrs deeply saddens us. We know who is behind this. Leyla Zana says “hands should be taken off the trigger”. The only solution is for the terrorist organization to relinquish their weapons. Security forces will not drop their weapons.”

Prime Minister Tayyip Erdoğan was a guest on a show broadcasted simultaneously on atv and aHaber in which he answered questions from a panel of journalists including Sabah Chief Editor Erdal Şafak. During the broadcast, Erdoğan shared a number of striking responses in his commentary on the recent terrorist attack in Hakkari which resulted in the deaths of six soldiers and two village guards. "It is obvious where the PKK is receiving its support," is just one of the many messages the Prime Minister relayed on the terrorism situation in Turkey.

"First of all I want to offer my condolences to the nation. The loss of six soldiers and two village guards in combat that began Saturday night at 22:30 has deeply saddened us."

When reminded of a comment he had made earlier in the day in which he stated, "Turkey is powerful enough to bring into line enemy-countries who hold onto the strings of the terror organization," Erdoğan stated, "It may be problematic to name a nation, however it is well-known who is supporting the terrorist organization. Some are even our neighbors. There are also some in the West that support them. They either offer support to the camps in the mountains or their political offshoots."

"They also have supporters in the media, both nationally and abroad. What the separatist terrorist organization wants most importantly anyway is for their propaganda to be made."

THE OPPOSITION HAS NO PROPOSAL

"The main opposition leader says, "We will solve the Kurdish problem". Fine, but how? What do you propose? Out of the ten items they listed all but one were simply findings. Yet, there have been no actual suggestions."

"There has been a stretch of time (in which security forces have increased efforts to battle the PKK) that started in Şemdinli on July 23rd. As I mentioned before, the media has practically waged a psychological war in Şemdinli. This is a very ugly move. This also affects the morale of our armed forces. However, our security forces continue to fight from land and air. We are now staging Special Forces joint operations with police. This is something that has never happened up until now. We are extremely proud of this situation. As for intelligence information received, as of July 23rd, we have lost two soldiers while 115 terrorists have been killed."

WOULD TAF HIDE THEIR LOSSES?

"Certain media organizations ascertain that the Turkish Armed Forces, or TAF, are concealing the exact numbers of soldiers killed in the struggle against terrorism. This is hilarious. Would the Turkish Armed Forces ever go and hide the number of soldiers lost? Would they ever refrain from announcing the number of helicopters lost? The opposite side is staging a psychological operation and unfortunately the media is falling into this trap. Sometimes I think whose media is this? There is nowhere that is outside of our control. Security forces will continue their struggle at any time and in any place they want."

"I want to extend my gratitude to the MHP. The party chairman recently announced that they stand by the government in the fight against terrorism. This is what we are expecting. It's now time to take action. Our entire security forces will continue this struggle until the end. That is until they drop their weapons."

"One of our most trying situations is the continuous attempt to penetrate our nation from the Iraq-Kandil region. In recent events, once again up to 200 people attempted to infiltrate our nation, however we intervened. There is also a struggle in the Amanos Mountains. PKK constituents, whom Bashar Assad is currently supporting, are trying to infiltrate our country. Of course, which party in Turkey supports the Baath regime? The CHP. Which party stands behind Bashar? The CHP. There are infiltrations from Syria. I didn't send our Foreign Affairs minister to Northern Iraq for nothing. We said if this situation is going to continue to constitute an element of threat, then the friendship between us will be eradicated. However, if we are going to continue to work together as brothers, then you need to put an end to the terrorist organization's right to exist. Assad is now playing the finals, the end is near."

(Responding to a question on whether a border operation will be staged to prevent infiltration from the Amanos.) "It will be seen. It would be impossible for us to remain patient in light of any wrong move made there. Any such attempt would not only mean they are attacking us, but it would also equate to an attack on NATO."

"We have staged operations where they needed to be staged. And we will continue to do so. It was Maliki himself who told me his strength was not enough."

"There has been tension recently between Northern Iraq and Baghdad. We shared this sentiment during the meeting held with Barzani. They also expressed their concerns. They shared plans to gather all of the Kurdish, Arab, Shiite and Turkmen groups in connection to the redevelopment there. That is, to start something against Maliki. That process has begun. However, as of now, it has not reached its objective. There are certain reasons for that."

"Even though they said let's work together, there have been no positive steps taken. We will continue in the same fashion with Mr. Barzani."